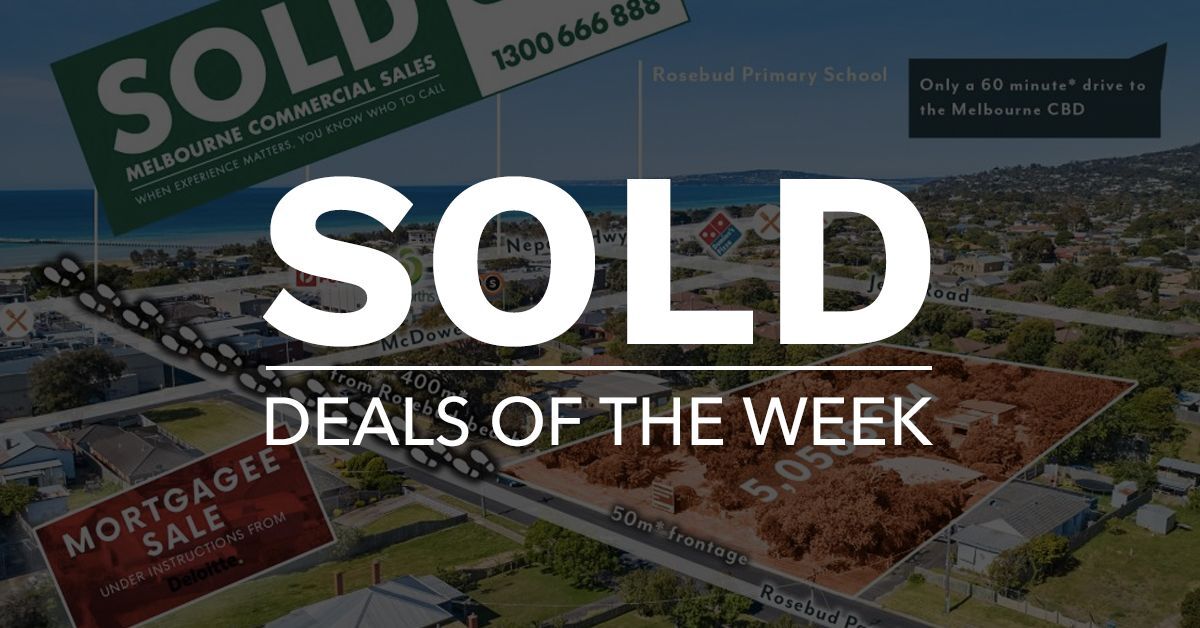 MULGRAVE - $9.1 million
A local business owner has purchased an 8,719sqm vacant freestanding office building in Mulgrave, in Melbourne’s east, from a private investor for $9.1 million.

Located at 362 Wellington Road, the two-level office building had undergone an extensive refurbishment in 2017 and is ideally positioned within the commercial business park hub of Mulgrave.

With a frontage of over 64m to Wellington Road the 3,775sqm building is zoned Special Use Zone 6.  There are 198 on-grade car spaces on title, with an additional 20 on-grade carparks on a 99-year lease.

The deal was negotiated by Benson Zhou, Clinton Baxter and Julian Heatherich of Savills Australia.

ROSEBUD - $3.62 million
A vacant 5,058sqm landholding in Rosebud has been purchased by a residential developer for $3.617 million.

The site, situated at 23-27 Rosebud Parade, boasts an extensive 50m frontage in an attractive location just 400m from Rosebud Beach and 250m from Rosebud Shopping Centre. It attracted interest from a range of residential and aged-care developers with CBRE sales agent Julian White stating that “the sale was a clear sign of the confidence in the residential development sector, with investors for multiple end-use profiles pursuing the offering.”

The 8,244sqm property, located at 297-307 Roslyn Road, was approved for a three-storey medium-density nursing home set to accommodate 122 beds. Japara initially had plans for a 136-place complex, however the application drew heavy objection. Japara paid $3.5 million for the site in late 2016.

Knight Frank’s Tom Ryan and Ed Wright handled the sale, stating that they received around 150 enquiries since the property was launched for sale in mid-February.

MERRYLANDS - $2.7 million
A NSW-based investor has snapped up a fully leased boarding house for $2.7 million after successful post-auction negotiations at 20A Centenary Road in Merrylands.

The asset, that came with 313sqm of building area on an 818sqm landholding, was leased to the Hume Community Housing Association until December 2025, returning a passing income of $163,160 pa.

The 12,364sqm arcade, which is located on the lower levels of Sunland’s two-tower Circle on Cavill apartment development, was originally picked up by EG for $40 million in 2011. The vendor then undertook a $13 million renovation.

Accountancy and financial services firm Snelleman Tom is on a secure 11-year lease until December 2026 with one five-year option - the tenancy also comes with five car parking bays. This asset is ideally situated adjacent to James Street Retail Precinct and is a 700m walk to Fortitude Valley station and less than 2km to the Brisbane CBD.

The sale was negotiated by Will Carman and Robert Dunne of Savills Australia.

WARANA - $1.6 million
A free-standing industrial building has been snapped up for $1.6 million on the Sunshine Coast at 41 Production Avenue in Warana.

The asset, which sits on a 1,745sqm total land area, will remain as a transport depot following the sale. The total building area includes a fully air-conditioned office area of 895sqm directly opposite the major Kawana Way thorough-fair.

The property was marketed and sold by Ray White Commercial’s Brenton Thomas.

Located at Stage 7I, Commercial Circuit, Flagstone is a Peet Masterplan community bringing 12,000 homes and approximately 30,000 residents to Flagstone over the next 25 years. Flagstone will also include a city centre comprising of 126 hectares of retail and office floor space with the proposed passenger rail service running through the middle. The site is within walking distance to major retailers, including Coles, McDonalds, 7Eleven, IGA, SNAP fitness and Dominos and 35 metres to Commercial Circuit.

The deal was negotiated by Will Carman and James Stevenson of Savills Australia.

LESMURDI & NOLLAMARA - $4 million +
Separate private investors from Singapore have snapped up two leased fuel stations for a combined total of more than $4 million.