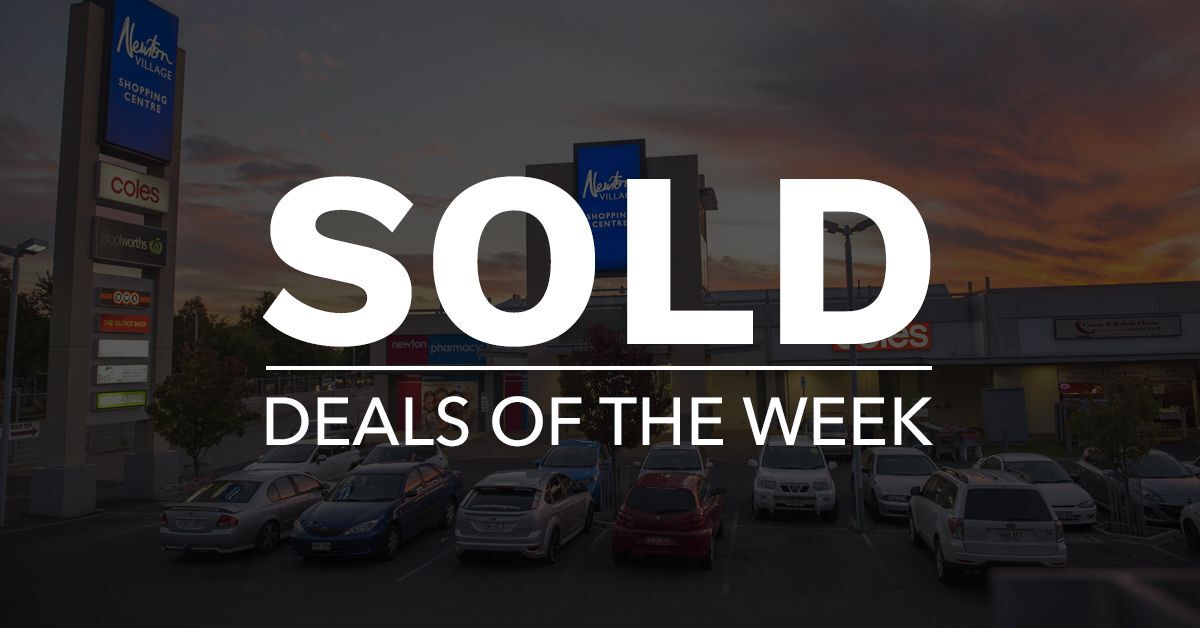 The pre-sale of the 107 Overton Road asset reached settlement following the recent completion of the 3,126sqm office building, which is leased to the Victorian State Government.

CBRE sales agent Scott Orchard said that “this is one of the first major, off-the-plan office deals to be completed in this current construction cycle, which is very significant for market confidence.

“Investors have made clear their intentions to focus on properties with sound fundamentals and we are already experiencing a ‘flight to quality’ where well-located assets with reliable income streams are keenly sought.”

MELBOURNE - $9.2 million
A two-storey asset on Swanston Street in Melbourne’s CBD has sold successfully at auction, in front of 200 attendees, for $9.2 million.

Located at number 273 Swanston Street, the asset represents the first building to come onto the market in the tightly-held retail strip in five years, and achieved a new record rate of $70,769/sqm for the Melbourne CBD. The building is currently leased to dumpling bar New Taipei.

CBRE’s Melbourne City Sales team of Alex Brierley, Julian White, Nathan Mufale and Chao Zhang managed the sale on behalf of the private family who owned the building for the past 70 years.

TARNEIT - $5.45 million
A childcare centre in Melbourne’s growing western district has been sold on to a Sydney investor for $5.45 million.

The 950sqm complex, located at 28-34 Marengo Road in Tarneit, is licenced for 120 places and is currently occupied by Sparrow Learning returning annual rent of $316,087 (ex-GST and outgoings). Construction was completed just three years ago.

BRUNSWICK - $5.02 million
A prominent corner retail property, situated at 462-464 Sydney Road, has fetched $5.02 million under the hammer following a hotly contested battle between eight bidders and more than 100 bids. The final price was $2.22 million above initial expectations.

The 717sqm property is leased to a two-dollar shop with a new 5 year term with no further options, and delivers the purchaser a net income stream of $131,453 per annum.

LEICHARDT - $15.5 million +
A warehouse complex in the heart of Leichhardt, in Sydney’s inner-west, has recently sold for over $15.5 million.

The ASX listed real estate investment firm has added the new assets to their unlisted healthcare fund. Both properties are in established health precincts and are occupied by strong tenants. The first asset, located at 55 Little Edward Street Spring Hill, in Brisbane’s CBD, is a multi-tenanted medical office and day surgery with a 484-bay carpark. The second property, Pacific Private, located at 123 Nerang Street, Southport, on the Gold Coast is a medical office and day surgery with 225 car spaces. Elanor intends to add more high-quality commercial healthcare real estate assets to the fund.

NOOSAVILLE - $4.7 million
A local family has scooped up the Noosa Par 3 Golf Course for $4.7 million in the Sunshine Coast’s Noosaville.

The asset encompasses 30 hectares of land across four separate titles and is currently occupied by a golf business.

The site was marketed and sold by Ray White Commercial’s Louisa Blennerhassett and Paul Butler with Ms Blennerhassett stating that the team took the property to market understanding the buyer for the property would most likely be an astute commercial operator, either as a developer/land banker or golf course operator.

Located at 21 King Edward Road in Osborne Park, the 6,862sqm mixed retail and industrial asset sits on a 1.06-hectare landholding zoned for development. The property was sold with several tenants including Cosh Living and Western Work Force.

NEWTON - ~$30 million
Parramatta based boutique developer Revelop has recently scooped up an Adelaide mall for around $30 million.

Newton Village Shopping Centre in Adelaide’s north-east comprises a 9,965sqm building area on a 2.2-hectare block. The centre is anchored by two major supermarkets Coles and Woolworths, as well as accommodating The Reject Shop, Jetts 24 Hour Fitness and 23 other specialty stores.

Savills’ Rino Carpinelli and Ryan Mills managed the off-market campaign stating that the deal was a display of real confidence in the South Australian retail market during the COVID-19 economic slowdown.