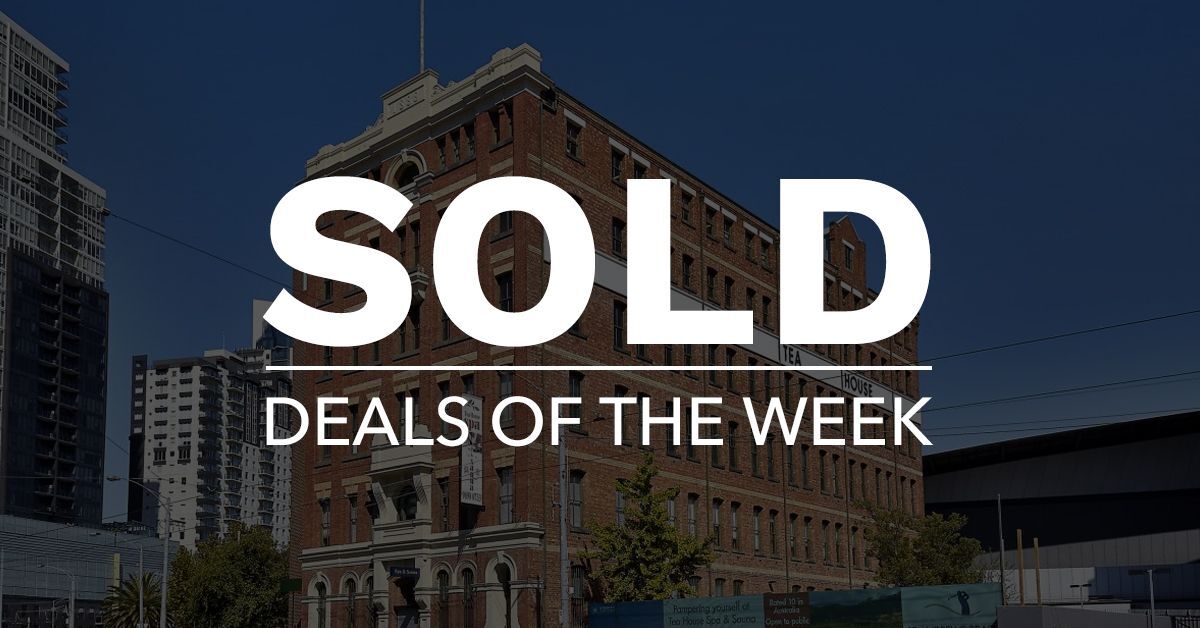 Located at 28 Clarendon Street, the heritage listed “Robur Tea Building” was built in 1888 and is one of the most prominent examples of a 19th century warehouse in Melbourne.
For many years, the former factory and warehouse was one of the tallest buildings outside the CBD, with its height and character establishing it as a South Melbourne landmark.

The building, which has been largely vacant for several years, has a net lettable area of 3,250sqm and occupies a large site of 2,948sqm.

BALLARAT - $12 million +
The renowned Craig’s Royal Hotel in Ballarat has been scooped up by pub operators Black Rhino Group for more than $12 million.

Located at 10 Lydiard Street the iconic drinking hole was first established in 1853 and had been in the possession of John and Mary Finning for more than 20 years. The purchase joins a strong portfolio of venues including the Railway Club Hotel in Seymour, the Victoria Hotel in Shepparton, the Richmond Social in Swan Street, the Ivanhoe Hotel and Royal Oak Hotel in Cheltenham among many more.

Craig’s Royal presents 37 rooms, a coffee shop and a restaurant, with the sale also including a gaming licence.

JLL’s Will Connolly handled the sale.

SORRENTO - $2.55 million
A popular Sorrento café has sold successfully under the hammer to a Mornington Peninsula local achieving $250,000 over its reserve to settle at $2.55 million.

174 Ocean Beach Road, known better as The Boss's Daughter, encompasses a 233sqm landholding with 44m of combined corner frontage. It was sold with a 5-year net lease (tenant pays rent + outgoings) to the already established café providing annual income of $100,705.

The Woolworths and Reading Cinemas anchored Riverdale Shopping Centre in Dubbo was first acquired by the Sentinel Countrywide Retail Trust in 2014 for $14 million. Upon the recent sale, the centre was close to 100% leased, with Woolworths last year taking up a five-year option.

Steven Lerche from Savills Australia managed the campaign, stating that “the majority of neighbourhood centres are not prone to the effect of online retailing as they provide services and mostly attract customers to shop at the centre.”

WEST RYDE - $5.2 million
A landmark property at 1 Chatham Road in West Ryde that housed Taffa’s Mitre 10 Hardware store, one of the suburb’s oldest established businesses, has sold for $5.2 million at auction.

The historic asset, that ceased trading on 31 December 2019, came with 403sqm land area, boasted three street frontages, and had been in the same family since 1955. It was offered as vacant possession. More than 90 people attended the auction with the opening bid starting at $3.8 million.

YARRABILBA - $1.82 million
A swimming school in Yarrabilba, in Brisbane's south, has recently traded hands to a local investor for $1.82 million.

Located at47-49 Adler Circuit, the complex features a new building on 1,243sqm of land and was sold with a 10-year lease to Little Snappers Swim School.

SOUTHPORT - $1.65 million
A commercial property at 80 Minnie Street in Southport was recently snapped up by an investor for $1.65 million.

SOUTHPORT - $1.305 million
A second Southport commercial property was also recently successfully sold under the hammer, this time located at 170 Scarborough Street and selling for $1.305 million.

The property comprises an impressive atrium reception and meeting room and large open-plan area with multiple workstations, as well as car parking for nine vehicles. Five competing bidders competed along 26 bids until reaching the settlement price.

Located at 214-222 Railway Terrace on a triple titled 1 Ha landholding, the property presents a total of 16 rooms, 4 x 8 bed dorms, 8 x 4 bed dorms and 4 doubles. Significant facility upgrades had been completed prior to the sale. The property also comprises a separate building, the "Boodjidup Lodge", offering a further 10 rooms.

The site was marketed with potential for a combination of short stay tourism and permanent residential re-development or strata title subdivision.

KENSINGTON PARK - $1.359 million
A mixed-use building in Adelaide’s inner-east, with strong development potential, recently sold under the hammer for close to $1.36 million.

The property, holding address at 368 Magill Road in Kensington Park, comprised of two ground floor retail spaces (one leased and one sold vacant) with a top floor residence on an 832sqm block.