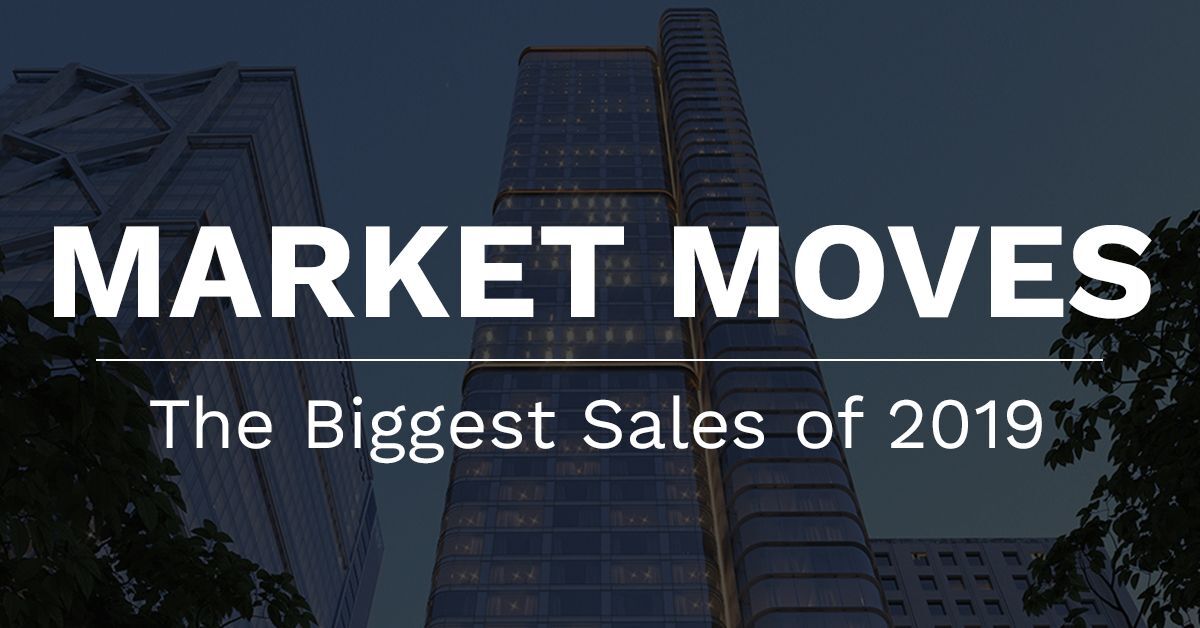 Charter Hall and Canada’s Public Sector Pension Investment Board came together to acquire the 47-storey, A-grade CBD office tower at 242 Exhibition Street, in an off-market transaction worth $830 million. The tower retained 100% occupancy by Telstra and underwent a $67 million upgrade to the lifts and base building areas before the sale.

But this impressive sale wasn’t the only CBD and CBD-fringe tower to make waves through the year as the GPT Wholesale Office Fund took 100% ownership of their Southbank office tower, at 2 Southbank Boulevard, securing the remaining half share for just over $326 million from Frasers Property Australia.

In the suburbs, Dahua Group paid $140 million for a 98.4-hectare site at 688 Aviation Road, Point Cook. The large site neighbours a 96-hectare block at 640 Aviation Road, which the property group purchased for $52 million in 2016.

Melbourne’s suburban office assets also proved a hot commodity, particularly in the south-east, with Singapore property giant Ascendas REIT picking up a new eight-level Mulgrave office building, set for completion in mid-2020, for close to $111 million. The development spearheaded by a joint venture between Asia-based real estate platform ESR and Frasers Property, and will serve as the new national headquarters for carmaker Nissan.

Frasers Property Australia had a considerably good year in the industrial sector, picking up a 41.3-hectare industrial development site in Dandenong South for around $80 million; this follows its $40 million acquisition of a 63.4-hectare block in Epping late in 2018 – where it is also proposing an industrial park.

Another major suburban office deal made news with Melbourne's Zagame family agreeing to $55 million for a Hawthorn building currently leased to Swinburne University. The four-storey building was originally held by Sydney-based investment firms Trumen Corp and Bricktop Group, who paid $37 million for it in 2015.

Large shopping and lifestyle centres also had their fill with Woolworths selling a 26.47-Ha land parcel adjacent to the newly built Mernda Train Station for $51.5 million. Primewest added the Geelong Gate Lifestyle Centre in Corio to their Third Diversified Income Trust for $44.25 million. While a local family picked up the Highpoint Lifestyle Centre in Maidstone for $25 million.

Newmark Capital also splashed out $51 million on a yet-to-be-completed large-format retail centre in the regional Victorian town of Warragul.

Charter Hall was busy around the nation, and in Sydney they partnered with Abacus to purchase 201 Elizabeth Street CBD tower for $630 million. The partnership comprised of a 68% and 32% split respectively. The Charter Hall Retail REIT also dived into the Rockdale Plaza, spending $142 million and receiving 21,000sqm of lettable area and 907 car parks in return.

Yuhu Group finally settled on the $380 million acquisition of the six-hectare Bakehouse Quarter site in North Strathfield. It bought the property from BlackWall in mid-2017 then exercised extension options to finalise the purchase.  The property has long-term potential to be replaced with a new township with an end value of about $1 billion.

Stockland secured the remaining 50% share of Sydney’s Piccadilly Centre from Oxford Properties for $347 million. Simultaneously, Stockland sold off its half share of the nearby 135 King Street and the Glasshouse shopping centre for $340 million.

In more Glasshouse, but this time in Macquarie Park, Charter Hall signed off on an off-market property, securing two 50% stakes in the Macquarie Park Glasshouse office building for a total of $331.3 million. Each share was purchased by two different Charter Hall trusts/funds. The new acquisition was sold with a pre-commitment to the NSW Government on a 12-year lease.

Another of Sydney’s biggest CBD office tower deals of year arose from the trading of the Central Square complex trading hands to global fund manager LaSalle Investment Management for $325 million.

North Sydney continued to blossom through the year, with developer Billbergia securing a buyer for the hotel component of their 48-storey mixed-use tower for $202 million. The 252-room hotel is expected to be completed in 2021 in what will then become North Sydney’s tallest tower.

Parramatta asserted itself as a hot ticket on more than one occasion with Centuria's A-grade Wentworth Street office tower trading to Singapore-based SC Capital for $105.3 million. Wentruth Pty Ltd, another Asian investor and new entrant to the Australian market, moved into the western district capital with an $80 million acquisition of a six-storey office building in Parramatta's CBD. Raffles Education bought the property in 2014 for $29 million and have been looking for a buyer since their only campus closed earlier this year.

Offices and hotels continued making news in and out of Sydney’s central area. In Darlinghurst, an office property sold to Melbourne-based commercial property investment group Marks Henderson for $92.75 million.

The first transaction to be made via a NSW court-ordered strata renewal collective sale saw the Seasons Harbour Plaza serviced apartment hotel, at 252 Sussex Street in Sydney, settle for around $81 million. The Novartis Building in Macquarie Park was sold to funds manager RF Corval for around $62m. An office strata block at 270-272 Pacific Highway in Crows Nest was picked up by Chinese-backed investor China Venture for close to $60 million. And the Redcape Hotel Group recently parted with the St George Hotel in Sydney's south-west suburb of Belmore for $47.1 million.

Another Edward Street asset, this time at number 171, sold to Dexus in an off-market transaction worth more than $80 million. The asset was sold with an approved permit for an 81-storey, 274m tall skyscraper encompassing 642 apartments and a number of shops, however it was speculated that Dexus will proceed with a commercial tower instead.

Brisbane's office market enjoyed a steady recovery after 25 Montpelier Road in Bowen Hills traded to Centuria for $65.4 million, with the new owners stating that they have strong expectations for Brisbane office growth to "ramp up in the next six to 12 months".

A 14-storey office building located at 420 George Street in Brisbane’s legal district has sold for just over $42 million to Dymocks Properties and saw an over double return for previous owners, Melbourne’s Forza Capital, who purchased the property in 2015 for $20 million.

Lendlease sold their half share in Adelaide's biggest mall, Westfield Marion, for $670 million to a property trust sponsored by Singapore Press Holdings at a discount of more than 9% of its book value. It was a sale that was eagerly watched by the national market, with many seeing the result as a benchmark for the valuation of major malls across Australia. Lendlease did however receive far above the expected price of $115 million for their A-grade Flinders Street office and carpark property in Adelaide’s CBD, securing a sale to Centuria Capital Group for $127 million.

Singapore-listed property trust, Suntec REIT, snapped up the Allianz Centre in Adelaide for $148.3 million. The sale was the fifth Adelaide office tower to sell for over $100 million in close to 12-months, highlighting the growing appetite for commercial assets in this central precinct. The 12-storey A-grade tower was previously owned by private syndicator Arc Equity Partners who secured it for $81 million in 2011.

Renewed activity continued across Adelaide’s CBD with Real I.S. Group’s successful acquisition of an A-grade tower at 100 Waymouth Street for $85 million. And Charter Hall snapping up a central, city office from Blackstone, this time at 121 King William Street, for $82.25 million.

After 66 years of operation, Coca-Cola Amatil sold its historic Thebarton (former) bottling site to Australasian Property Developments (APD) for $37.3 million. The new owners have long-term plans to redevelop the 3.5-hectare Port Road site into a mix of commercial and residential uses. The sale also included two nearby smaller sites.

Ahead of its planned $255 million public listing, ASX-listed Elanor Investors Group agreed to two separate acquisitions; one at 200 Adelaide Street in Brisbane and one at the A-grade WorkZone commercial building in Perth’s CBD. The fund already owns 51% of the Perth property, which it bought for $125.25 million in 2018.

Retail and shopping centre movements weren’t just isolated to the east coast, as the unlisted Charter Hall Direct Consumer Staples Fund secured a Bunnings-anchored retail centre in Claremont in an off-market deal worth $35 million and a neighbourhood shopping centre in Alkimos traded to a private local investor for just over $34 million. Woolworths also divested its self-anchored Banskia Grove shopping centre in Perth’s north for $27.28 million to a private Singapore-based investor.

The iconic Subiaco Hotel in Perth was also put up for sale, the first time in over 50 years, reaching settlement in a quiet deal speculated at over $10 million.