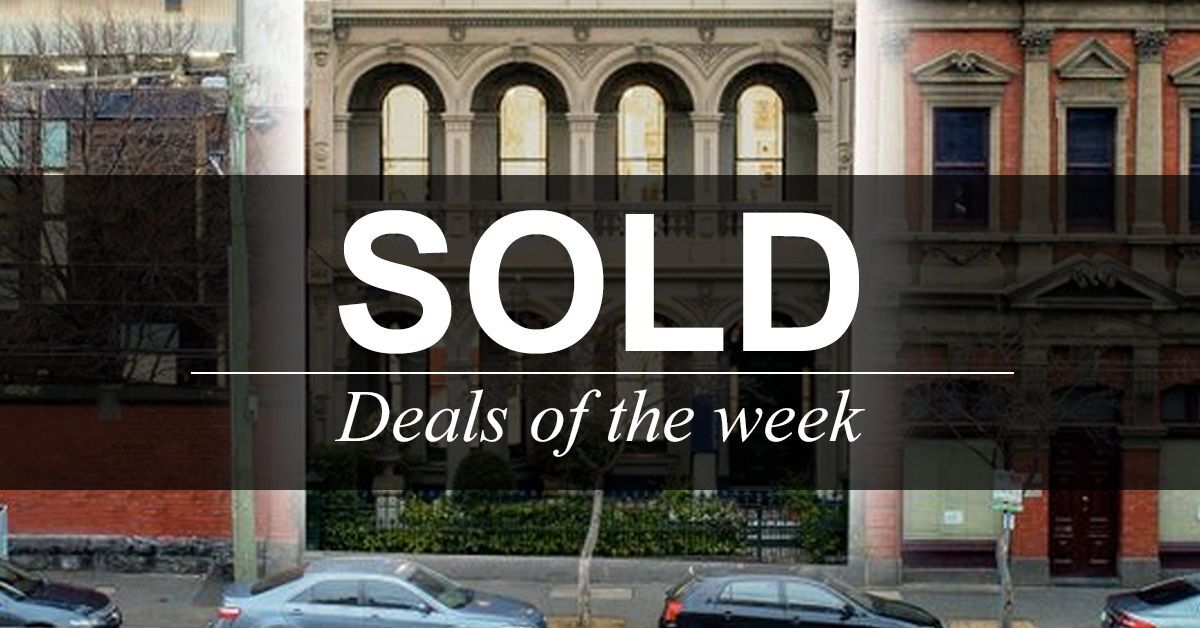 Located on Levels 7 and 8, at 474 Flinders Street, the floors comprise a total lettable area of 1,676sqm and were sold with vacant possession to a local investor seeking to capitalise on the current unprecedented demand for office space within the Melbourne CBD.

The property is at 11 Brunswick Street in Fitzroy, offers a standout heritage façade and was sold with a seven-storey development approval set for a $60 million redevelopment project.

The site was sold with vacant possession and was previously occupied by Alcaston Gallery – one of Melbourne’s leading contemporary art galleries.

EAST MELBOURNE - Undisclosed
An East Melbourne office building, located at 76-78 Jolimont Street, has changed hands for an undisclosed amount in what represents the suburb’s only office transaction for 2019. The property features a three-level freestanding office building with six car parking spaces.

Canada's Oxford Properties acquired the Investa Office Fund for $3.4 billion in 2018 and began offloading the 12 large office assets earlier this year. The recent North Sydney tower sale marks the end of the divestment and has resulted in a total $3.2 billion worth of sales over the past nine months.

The North Sydney tower is comprised of 19,295sqm of NLA across 21-storeys and located at 99 Walker Street, near North Sydney train station.

PARRAMATTA - $64.25 million
Charter Hall Direct PFA Fund is taking advantage of the apparent strong investor demand in the Sydney’s two other major office markets, Parramatta and North Sydney, with the sale of 9 Wentworth Street to a private investor for $64.25 million.

The seven-storey A-grade building offers an NLA of 7,651sqm, and drew a hot contest with 15 bids in the first round from domestic and international funds, private investors and several local syndicates.

The property, located at 12 Waterloo Road in Macquarie Park, was purchased by the fund manager through a syndicate for $14.55 million in 2015.

"We are delighted that our strategy to reposition and re-lease the property, coupled with New South Wales’ strong economic fundamentals, has resulted in considerable value-add for our syndicate members,” Lester Group’s Adrian Lester said.

LEICHHARDT - $4.375 million
An investor has won a hotly contested campaign, securing 122-128 Marion Street in Leichhardt for $4.375 million after a successful post-auction negotiation.

CRESTMEAD - $95 million
36 hectares of industrial land on Brisbane's outskirts has been picked up by Singaporean property giant Mapletree Investments in a deal worth about $95 million.

The property is comprised within the proposed 157 hectare Crestmead Logistics Estate, located south of the Logan Motorway corridor in Brisbane, spearheaded by local developer/vendor, Pointcorp. The Brisbane developer has been amalgamating the land over the past two years and will start developing the estate in January.

Mapletree will then be able to pursue its own warehouses on the site.

RIVER HEADS - $2 million
A neighbourhood retail centre in River Heads on the Fraser Coast has sold to a Hong Kong-based investor for $2 million.

The regional shopping village sits on a 2.45-hectare site offering a 686sqm property anchored by IGA and Kingfisher Bay Resort. The property also presents a piece of waterfront land approved for a subdivision of nine duplex dwellings and two retail shops.

MALAGA - $2.1 million
An industrial property located at 19 Kalli Street in Malaga, approximately 10 kilometres from the Perth CBD, has transacted for just over $2 million.

BLEWITT SPRINGS - $2.05 million
A 12.9-hectare vineyard and lifestyle property in the sub-region of Blewitt Springs has successfully sold under the hammer for just over $2 million. The property comprises of three titles and two separate residences, as well as an established vineyard planted in the 1950s, contributing approximately nine hectares of Shiraz and Cabernet Sauvignon.

Located at 193-195 Jubilee Highway East, the site is approximately a 45 minutes’ drive south of Adelaide and offers the new owners potential to pursue a wine-tourism development.