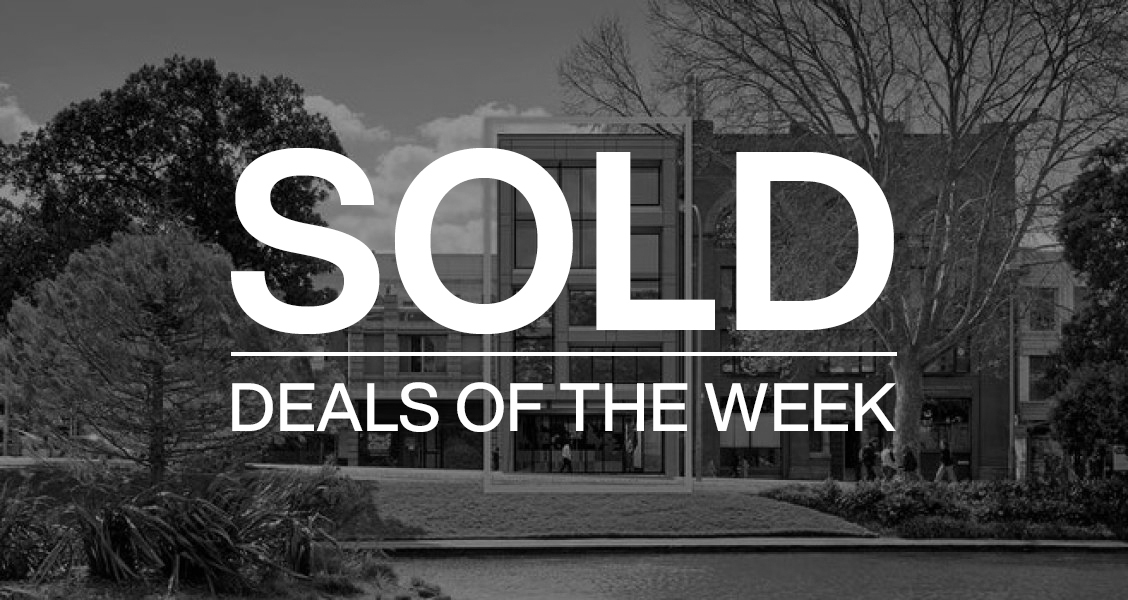 A deal for a 50% share of North Sydney’s Greenwood Plaza has been struck between Nuveen and Singapore listed CapitaLand Integrated Commercial Trust (CICT) for $422 million. The agreement includes a 28-storey neighbouring office at 101-103 Miller Street with Mirvac holding the balancing 50%.

The shopping centre presents a three-level building with a GFA of 9,245sqm accommodating 98 retailers.

The deal was negotiated by Colliers’ Adam Woodward, Lachlan MacGillivray and James Barber together with Knight Frank’s Ben Schubert and Tyler Talbot.

A massive 16,500 Ha north-west NSW portfolio of land once earmarked for a coal mine has been carved up between 12 local farming families plus one corporate institution in a landmark deal valued at circa $120 million.

The sale process followed an agreement made last year with the NSW Government under which the vendor, Shenhua Watermark Coal Pty Ltd, returned its exploration license and withdrew its mining license for the site.

A Shenhua spokesperson said it was particularly pleasing that the sale process had returned much of the land to the local farming community while also delivering tangible environmental and indigenous outcomes.

The Budgewoi Coast Hotel, located 100 kilometres north of Sydney, has recently traded hands from Down the Booza Pty Ltd to Bill Drakopoulos for $15 million. The waterfront pub was last sold in 2005 for $6.9 million.

A DA approved freehold building in Glebe has recently transacted for $13 million.

Located at 257-259 Broadway, the 356sqm landholding currently presents a dual commercial space. The site was offered with plans for a new multi-story building with a “Piet Mondrian” inspired artistry/architectural design. The plans offer 2,250sqm of GBA plus over 100sqm of balconies and terraces. Internally the space will see a high-end fit-out designed by Levine Vokaberg.

Palisade Investment Partners has joined Spirit Super to take over the management of the Port of Geelong for $1.2 billion.

This is its second major infrastructure purchase in two months – teaming with Spirit Super to acquire GeelongPort, which manages the Port of Geelong.

The deal, which will see the partnership acquire GeelongPort in a 51/49 split to Spirit Super’s favour, was made with 50/50 SAS Trustee Corporation of NSW’s State Super and Brookfield’s Linx Cargo Care Group.

The Port of Geelong is the second largest port in Victoria and sixth largest in the nation.

An industrial facility within the popular ‘Merrindale Estate’ has recently sold off-market to an owner-occupier for $2.3 million.

Located at 2 Sigma Drive in Croydon South, the 731sqm building area provides a 556sqm high clearance warehouse and a 175sqm office component with dual roller doors and high-quality fittings throughout. The property also has 13 on site car spaces.

A housing estate site located 47km south of Brisbane in New Beith has recently been picked up by Frasers Property Australia for close to $80 million – 83% above its book value.

Vendor Peet Limited held the 215 Ha landholding for over 10 years before deciding to sell. The site is zoned Urban Living and is projected to be able to suit circa 2,257 dwellings.

The new $3.4 billion Flagstone City development in Brisbane’s south has been picked up by Peet Limited for $46.15 million. Peet already held a 50% share prior to this recent deal.

As the only new subdivision in Jandakot in a decade, the Jandakot Freeway Industrial Estate, is now completely sold out. Located on the corner of Solomon Road and Cutler Road, Ray White Commercial WA was responsible for selling over 60% of the land to a value of $5.749 million.

The project was developed in two stages featuring small lots starting from 1,124sqm up to 2,098sqm.

Sentinel Property Group has scooped up a fully-leased cold storage facility at the Wishart industrial precinct for $7.4 million.

The facility was sold through Matthew Trim of Commercial Adelaide.