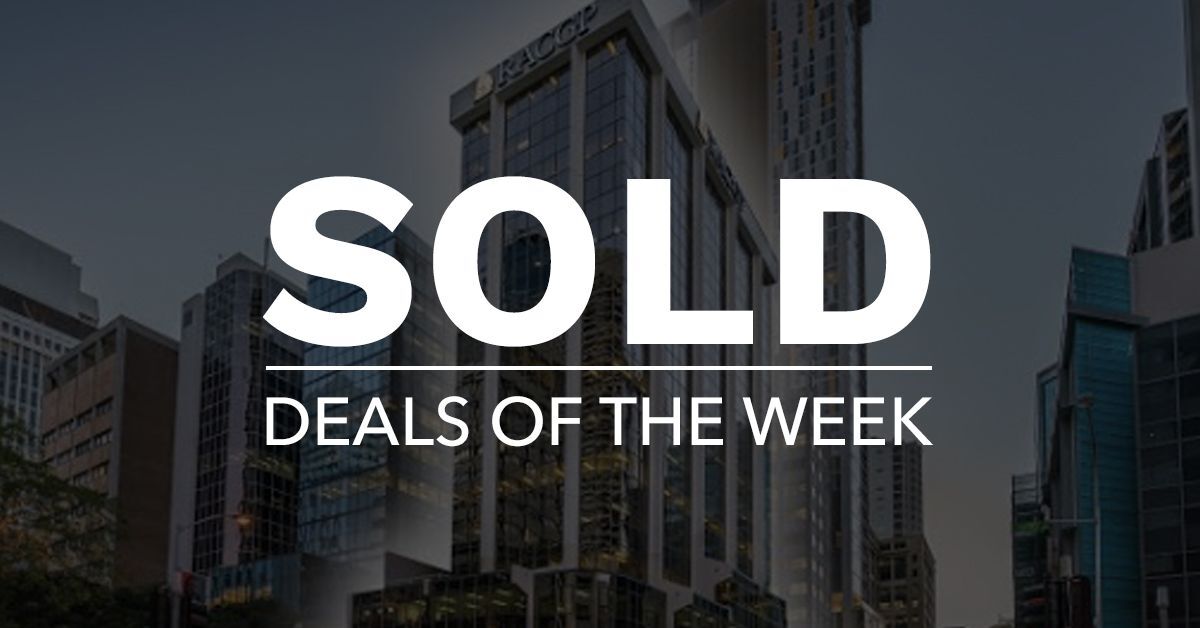 The 8,600sqm project, at 71 Gipps Street, was settled following a large leasing pre-commitment to IWG for 40% of the building. Aus Finance Group will still oversee the delivery of the Hayball Architects-designed project, named GCQ.

The sale was negotiated directly between the respective parties.

EAST MELBOURNE - $70 million~
A yet-to-be-built office in Victoria Place in East Melbourne has recently been picked up by Singapore’s ARA Asset Management with the backing of Canadian institutional investor, QuadReal Property Group for around $70 million.

The site, located at 200 -216 Victoria Parade, is set for completion in 2022 and will have an end value of $328 million. One of the vendors, Time & Place, sought development approval for an 11-level, 26,300sqm commercial complex before putting the site on the market. Time & Place will also be responsible for the site’s construction.

SAN REMO - $25 million
The Silverwater Resort in San Remo has seen the management rights and more than half of the freehold apartments scooped up by Melbourne’s Pentagon Group Hotels for around $25 million.

The large integrated leisure and conference resort, which overlooks Phillip Island, encompasses six meeting spaces with capacity for 500 people, restaurants and bars, heated indoor and outdoor swimming pools, sports courts and a children’s playground. The asset sits on an 8.5-hectare landholding and has a total of 186 apartments with a planning permit to add another 32 keys. Pentagon Group purchased 88 of the total number of apartments, with the remaining being owned and managed by individual investors.

The 9,647sqm centre, located at 300 Parramatta Road in Auburn, comprises five premium LFR tenancies including Officeworks, BCF, Decathlon and RSEA, and returns approximately $2.5 million per annum. Altis purchased the asset in 2014 for $21 million and proceeded with a redevelopment and refurbishment project, which they completed in 2018.

PYRMONT - $28.7 million
A freestanding 60-room hotel in Pyrmont has recently settled for $28.7 million after trading from a private Taiwanese family to Malaysian corporation IGB.

The Darling Harbour hotel, located at 131-133 Murray Street, is a newly completed development offering nine levels with a total GFA of 1,134sqm on a freehold 280sqm site. The new owners are yet to announced the market position and management of the hotel.

SMITHFIELD - $7.95 million
A recently-refurbished warehouse in Smithfield in Sydney’s west, has been purchased by an owner occupier for $7.95 million. Factory Fast, the new owner of 15 Sturt Street, will relocate from its current location in Sydney’s south.

The sale marks the largest retail buy to date for the new owners, bringing the value of the pair's retail portfolio to $485 million.

Consolidated Properties Group CEO and chairman Don O'Rorke has stated that the company intends to upgrade the entire shopping centre, "We will be undertaking an aesthetic upgrade to the entire Great Western Centre, with the aim of attracting new tenants to improve the already robust retail offering."

The centre sits around 10km north-west of Brisbane’s CBD, presenting 15,400sqm of floor space and is anchored by Woolworths and Aldi alongside 50 other stores.

BRISBANE - $53.5 million
An A-grade office in the Brisbane CBD’s coveted ‘Golden Triangle’ has recently been picked up by PGA Properties for $53.5 million. The 14-storey building, situated at 410 Queen Street, encompasses 5,704sqm and was sold with the commercial component around 94% leased.

Vendors RG Property acquired the building, known as 410Q, for $28.8 million in 2011 and proceeded with a $5.5 million upgrade and reposition.

TAIGUM - $26.35 million
The Taigum Village Shopping Centre in Brisbane’s north has been scooped up by an offshore-based Taiwanese shopping centre investor for $26.35 million. The sale centre was sold with more than 80% of the space leased to Coles on a 20-year lease.

CBRE sales agent Joe Tynan said that the sale was underpinned by residential growth in the area, including the adjacent retirement centre’s expansion.

“Over the past 12 months, we’ve noticed a substantial shift in sentiment towards the neighbourhood shopping centre category, with a resurgence of investor confidence fuelled by the current low cost of debt and a noticeable lack of supply.”

3431 Pacific Highway went to the market in late 2019 and was picked up by Skills Institute Australia, who moved quickly to secure the building to expand their existing nearby operations.

The address comprises a 2,312sq m corner allotment, accommodating a modern commercial building of 1,288sqm floor area. There is potential to add value or renovate for repositioning in the future.

Agents Gregory Woods and Daniel Pepper of Savills managed the 2020 campaign; the previously unsuccessful campaign was managed by a different agency.

WELSHPOOL - $3 million
The site of a former medical centre in Welshpool in Perth’s south-east has recently sold for $3 million; an owner occupier purchased the 5,210sqm corner block from Gizmo Investments.

ADELAIDE - $40.6 million
The Adelaide Mail Centre, a multi- faceted gateway site on Gouger, Grote and Blenheim Streets in Adelaide’s CBD, is said to be sold and under contract in a deal between Australia Post and Kennards Self Storage worth $40.6 million.

The large 17,924sqm site has favourable Capital City Zoning allowing Kennards a range of development outcomes, however it is believed that they will pursue a sale and lease-back.