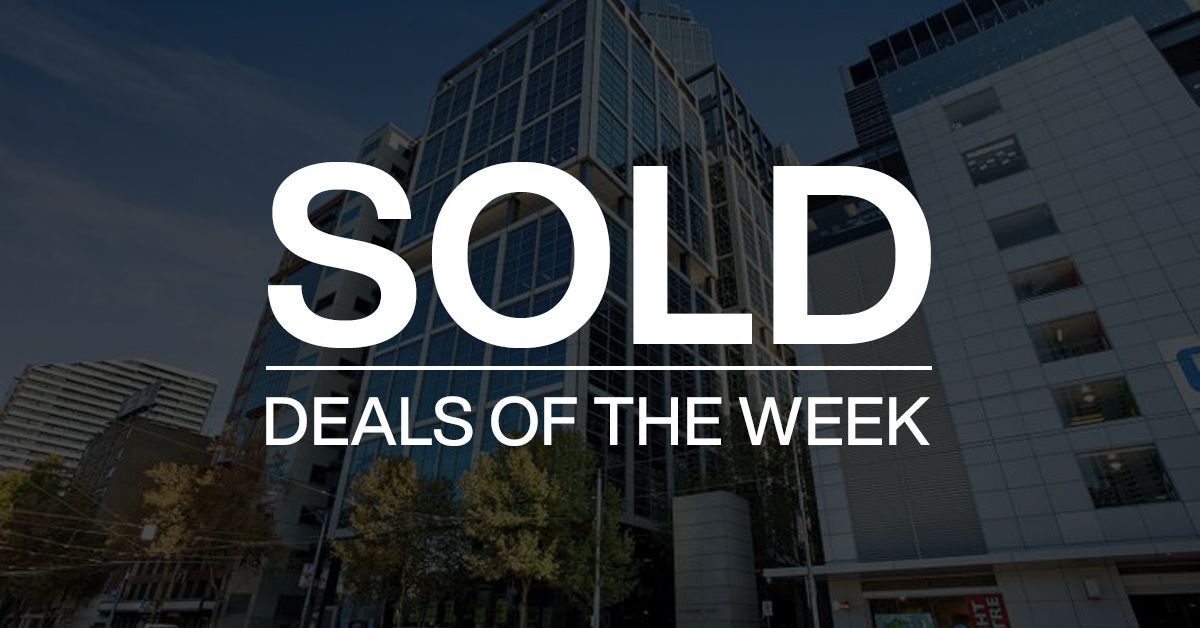 MELBOURNE - $450 million +
A Dexus-managed wholesale fund has divested a 22-storey A-grade CBD tower in Melbourne, in a deal speculated to be more than $450 million.

German investor Deka Immobilien will take over the tower at 452 Flinders Street, having already purchased the 20-level A-grade tower across the laneway at 15 William Street in 2009 for $167 million.

The Dexus property fund initially secured the 38,000sqm Flinders Street building in 2011 for $194 million, before proceeding with a grand refurbishment of the foyer. The tower comprises of 17 levels of office space, ground floor retail, three levels of underground parking.

CALRTON - $35 million~
The Rydges on Swanston hotel, home to the infamous quarantine program, has reportedly been sold to Pelligra Group for a speculated $35 million.

The hotel is located at 701 Swanston Street in Carlton and offers 107 suites. Pelligra have announced plans to upgrade the property into a 4.5-star hotel, with conference facilities. The vendor, Adelaide based hotelier David Horbelt, originally paid $12 million for the asset 20 years ago.

LANG LANG - $20 million~
General Motors Holden has sold its Lang Lang testing track facility to Vietnamese car maker VinFast for a speculated price of nearly $20 million. The site will continue to be used by Holden for testing.

GMH opened the track in 1957 and recently invested $8.7 million on improvements.

VinFast sits within Vingroup and was founded by Vietnam’s richest man, Pham Nhat Vuong, who earned his riches after the sale of his instant noodle business to Nestle; he’s currently worth close to $8 billion today.

BROADMEADOWS - $6.87 million~
Lighting manufacturer Darkon Lighting has scooped up a purpose-built industrial facility in in Melbourne's north for around $6.87 million.

The 3,824sqm property, located at 17 Broadfield Road in Broadmeadows, will serve as the new owner’s headquarters, and traded at a gross rate of $1,796 per square metre.

WOLLONGONG - $57 million +
A five-storey office building in Wollongong's CBD that is home to the Australian Taxation Office has traded hands, from Black Opal Bay to property fund manager Castlerock, for more than $57 million. The deal marks a new record for the city, beating 90 Crown Street, which sold for $50.38 million in 2019.

Located at 45-53 Kembla Street, the building offers 6,761sqm of NLA, 93 car parking spaces and has the ATO as its anchor tenant with space also taken up by ANZ, the Red Cross and a cafe.

NEWCASTLE - $35.3 million
Eagle Property Group have traded a commercial asset in Newcastle to Marprop for circa $35.3 million.

Located at 51-55 and 61 Bolton Street, the sale highlights the changing face of Newcastle and the attractive yields to be achieved outside of Metropolitan Sydney. The asset was sold 94% leased to Government, NYSE and TSX listed companies with a WALE 8.7 years and a passing yield 6.5%.

NEWCASTLE - $10 million
In another recent successful sale for Newcastle’s Commercial Collective, the City of Newcastle have settled on a portfolio of buildings on Hunter Street for circa $10 million.

The sale will see significant changes made to the Civic Precinct as well as provide necessary upgrades to Newcastle Ocean Baths. Newcastle Councillors voted unanimously for the proceeds of the sale, almost $10 million, to fund these necessary upgrades to much loved community buildings. The assets currently return a net income of approximately $262,689 representing a net yield of approximately 2.62%.

KOGARAH - $15 million
A 1.1-hectare piece of Kogarah’s former Darrell Lea factory has traded from one builder to another for $15 million. Located at 152-206 Rocky Point Road, the factory offers a modern four storey office building which the incoming owner intends to occupy. The asset also includes tracts which will allow for industrial development in the future.

BUNDALL - $2.4 million
The Riviera Shopping Centre on the Gold Coast has traded hands from 30-year-long Victorian vendors to an experienced shopping centre investor for $2.4 million.

The 465sqm asset, located at 3 Clontarf Avenue in Bundall, comprises of six tenancies and sits on a 2,258sqm landholding.

The property was initially recorded with a home value of circa $12 million, however Dr Keogh was forced to sell at a ‘cut price’ after a newly built super dwelling blocked her river views and overlooked her backyard.

The public and bitter legal dispute began in 2015, with the local council initially siding with Dr Keogh. The State Administrative Tribunal overturned the council’s decision, although it did concede to some of Dr Keogh's demands.

Dr Keogh decided to proceed with the sale in spite of the impacted price.

The investment asset, located at 26-34 Caribou Drive, was originally acquired by the Cromwell trust in 2013 for $32.75 million.

The Rand Transport Distribution Centre was sold with a 15+ year lease to Rand Transport, a wholly owned subsidiary of Anchorage Capital Partners.