Michael Drapac is one of Australia’s most respected and revered property investors – with over four decades of experience in Australia, Asia & the US, Michael’s knowledge and experience is unparalleled.

Michael Drapac has performed over 200 property deals in his lifetime and has only lost money on three of them – and the losses were arguably nominal.

Since founding his eponymously named firm in 1987, Michael’s renown as a man with an acute ability to identify economic and market trends has grown and grown. As Chairman of Drapac Capital Partners, he has successfully invested and developed commercial, industrial and residential projects in Australia, Asia and has enjoyed remarkable success in the US.

Michael’s reputation in the industry is formidable and has been built upon delivering consistently high returns with low risk, through an unconventional investment model and philosophy. The path that led him into the property world was equally unconventional.

“I dropped out of school as a teenager but went back to night school at the age of 27 to finish my HSC.” Michael discussed recently during an interview with DevelopmentReady’s Rob Langton.

During the decade that fell in between leaving and then returning to high school, Michael tried his hand at many different vocations. He moved from hospitality, to an electrician apprenticeship, to selling homes as a real estate agent, but it was during his time working with bookmakers at the racetrack that Michael found his pot of gold.

As was the culture of the time, if someone managed to get some money together, they invested it in property. After managing a few successful transactions, Michael realised that he had a knack for buying and selling, and while completing a Bachelor of Science, Biochemistry and Pathology at the University of Melbourne and a Masters at Deakin, he founded Drapac Capital Partners.

From there, his story is one of significant but restrained success.

A Simple and Affective Thesis

“It’s not about how much money you make, it’s about your risk/reward.”

Listening to Michael describe his thesis and ultimately the reason he has been able to achieve such incredible success, one thing is driven home time and time again.

“I don’t like taking unnecessary risk. In property everyone thinks that more is more, but often it’s not.

“You see a lot of developers around town, and they’re making a lot of money. But every time they roll the dice, they’re putting everything on the line. For me, smart property investment is about your risk/reward profile.”

It’s a strategy that has paid off very well, particularly in Melbourne, where Michael saw a vision that few others did.

“Melbourne looked very different in the mid-early 2000s compared to now. I remember that in 2005 there was only two cranes in the sky. Development had been strong leading up to that moment, but all of sudden, developers weren’t interested.”

Michael saw a different Melbourne to most; he saw a CBD that was depressed but with still a great future ahead of itself; others thought that development was over. During this short period, Michael was very active and bought up around 10 acres in the very heart of Melbourne’s CBD well under value.

“There was a slight hiatus in the market, I don’t know why. All you had to do was have a view that Melbourne was going to grow. I paid $2,000 per metre for a site on William street. I paid $1,200 per metre on a site in the CBD that could go up 50 metres. And no one wanted it, I had no competition. It was as if no one had the vision to see what Melbourne would look like in five to ten years.”

Having a vision for the future might come effortlessly for Michael, but for most it is only realised in hindsight. That being said, Michael was happy to share, during his recent interview, the five key points he always looks for when he’s thinking about buying.

“As I’ve said, I’m not interested in taking risks. If you want to look for zero risk, or as close to, you want to buy development sites and not pay a dollar premium for the blue sky. And make sure you buy in an area that has a really good future. Make sure the development site operates as investment, so in the case that your thesis is wrong, you’ve bought an investment. Every site I’ve ever bought, was an investment site.”

Michael’s philosophy is as follows;

Michael’s tried and tested, and somewhat conservative approach to property buying and selling, is not bound by borders. In 2007 he took Drapac Capital Partners over to Japan with capital that he had raised in Australia. They started to buy and then the 2008 GFC hit.

“I’m not seduced by the idea of going overseas for the fun of it. I have a very simple formula about property and I’m always trying to find opportunities that meet my formula. But unfortunately, the GFC really impacted us.”

After just three years in Japan, Drapac Capital Partners had exited the country. In Australia, things weren’t in the best shape either.

“The GFC had a major impact on me; it was the first time in my life that I had significant debt. I had around $100 million of debt at the time and I got very nervous – so I decided to sell a lot of the sites. I sold nearly everything. The stuff I sold, I continued to watch and ended up selling again seven to eight years later for ten times the price. It was a learning experience.”

The Australian ended up being fairly well protected by the effects of the GFC, when compared to many other nations, and so Michael’s eyes started to drift overseas. Nowhere did he find a better candidate to meet his strict property ideology, as America. In 2011, having had a similar vision to the one he experienced in 2005, Michael made the decision to sell down all of his Melbourne assets and move to Atlanta, Georgia in the USA.

“When a city, which has been historically strong but at the moment is depressed and not developing, you can pick up sites for what their worth at their base value. You can buy high-rise sites for what they’re worth as a car park, or a dilapidated showroom and you don’t have to pay a premium for the blue sky.”

The Most Affordable Market in the World

The sheer size of America and volume of wealth is incomparable to Australia. Michael quickly found that capital was easily available, and the appetite was insatiable. Pretty soon into his dealings, Michael was fielding calls from $300 billion investment groups trying to buy into his firm.

“If you’re got some ability and you’ve got a track record, you can raise capital that fast, you can’t even imagine. It’s a bit harder with the banks because many of them were a bit beaten up following the GFC, but with private capital and joint venture capital… there’s enormous appetite.”

Drapac Capital Partners started buying up land in Denver, Chicago, Atlanta and Nashville. They continued through the Carolinas and went into Phoenix as well. In total the firm has transacted in 13 different states. And through all of this time, Michael has remained rigid in his more conservative strategy.

Currently, Michael is not buying anything in the US, he’s just selling. The current health crisis has definitely dampened the market, but Michael still believes that the US is the most affordable market in the western world.

“You can go and buy an affordable house in a decent suburb for $220,000 - $230,000 – New. There are 80 million millennials in the USA. There are currently more kids still living at home in their 30s than ever before. And it’s so affordable, there’s a fundamental housing deficiency, according to the Wall Street Journal, of 5-6 million. And there’s a huge deficiency of land – so the fundamentals for America are very strong. It’s a lot cheaper to buy there than it is here.”

A Shift of Equilibrium and New Opportunities

The US may have his attention for the time being, but Michael is filled with anticipation for the future of Australia’s market. From his perspective, the nation is looking at some dark days ahead in the short term – something Michael sees as a good thing for someone who works in ways as he does.

“I don’t want to prey on anyone’s misfortunes, but it is in these harder economic periods that we find our greatest prospects.

“We don’t have immigration; we don’t have the students coming in; we have thousands of apartments empty; we have mortgage distress. We’re going to see a change in equilibrium and a change in confidence – suddenly it doesn’t matter how compelling a deal is, people won’t be buying. 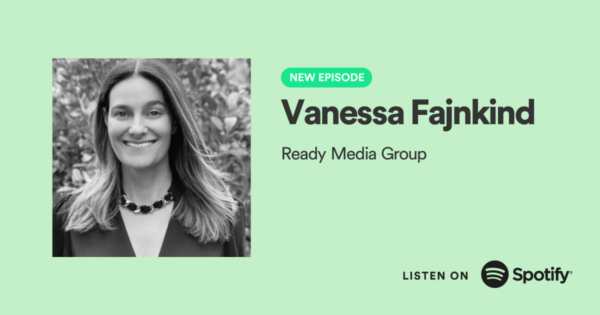 This exclusive new program aims to showcase the most inspiring and successful women in the property, finance, consulting, not-for-profit & management fields, ... 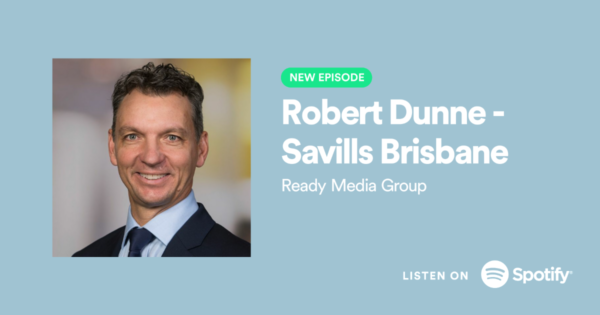 In this episode, we chat with Robert Dunne from Savills Brisbane 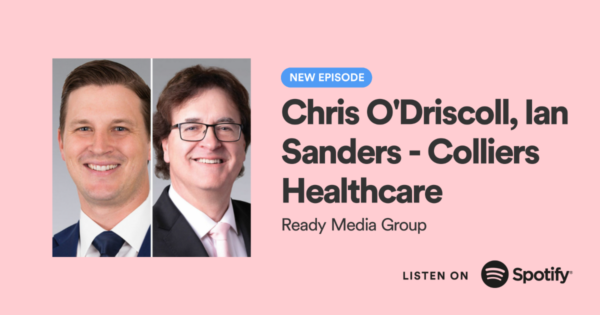 In this episode, we chat with Chris O'Driscoll & Ian Sanders from Colliers Healthcare 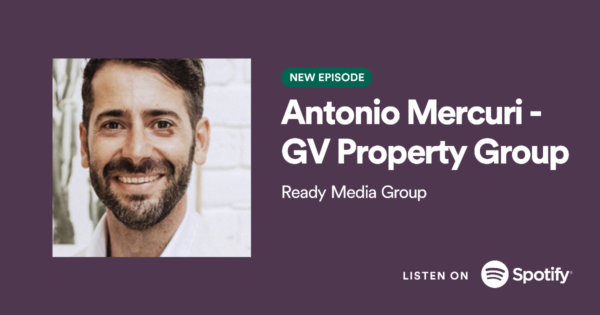 In this episode, we chat with Antonio Mercuri - Principal & Director at GV Property Group.

We speak with Tony Williams of Ray White Special Projects 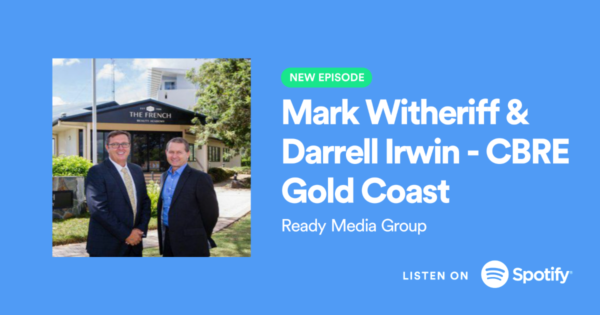 We speak with Mark Witheriff of CBRE, and Darrell Irwin of Clarence Property Corporation and Robina Group