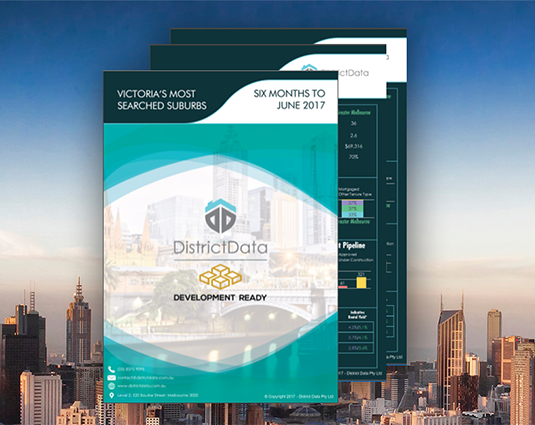 There is a changing geographic sentiment amongst developers in selecting suitable locations for their projects.

Australian development site portal DevelopmentReady.com revealed the ‘hot property’ in Victoria, based on the most frequent searches by property developers in the six months to June 2017.

The findings, compiled from an analysis by property research firm, District Data, identified the top searched suburbs were:

Development Ready Managing Director Nick Materia said that the data indicated the strength of development activity across a cross-section of housing profiles in Victoria, with a particular emphasis by developers in producing high-quality townhouse, single dwelling and land projects.

“Across the five top-ranking suburbs there are 767 apartments approved, 708 apartments at registration and sales status, 688 under construction and a further 276 under planning assessment,” Mr Materia said.

“Top-ranked Hawthorn has 509 apartments approved and at or nearing a sales and registration status, with 321 currently under construction as at June 2017.

“Within Hawthorn, one bedroom units achieve the highest indicative yield at 4.2 per cent, with a median sale price of $405,000. This is $45,000 higher than the median one bedroom unit price in metropolitan Melbourne which achieve an average yield of 5.1 per cent.”

District Data Managing Director Daniel Slomoi said the research highlights the need for added supply across a variety of markets to meet high levels of demand for affordable housing.

“Despite the diversity of these five top-ranking suburbs, the one common theme is the notion of affordability, with end-users comfortable with the value proposition on offer.

There is growing appetite from owner-occupiers for affordable housing, as they are priced out of home ownership in Melbourne’s inner ring,” Mr Slomoi said.

“The shift from an investor market to an owner-occupier market will continue the surge of smaller projects aimed at downsizers and young lifestyle-seeking owner-occupiers, at an affordable price-point relative to ownership of a detached dwelling.

“These smaller projects also allow developers to lower their risk appetite, with the requirement for existing pre-sales being reduced significantly.”

Doncaster East placed second and recorded the highest number of units at the registration and sales stauts, with 484 apartments on the market.

“With 18 per cent of Doncaster East’s population registered as 65 plus and 47 per cent of homes owned outright (compared to Greater Melbourne representing 33 per cent), Doncaster is attracting residents within its medium density townhouse market,” Mr Slomoi said.

“Opportunities for purchasers to secure a newly completed apartment will create more competition between developments and will enable buyers to negotiate and seek out the best purchase to suit their requirements.

“We expect enticing levels of incentives will be offered to buyers to secure sales.

“Development in Doncaster East is beginning to pick up following on from the successful high-density transformation experienced in neighbouring Doncaster. With a fantastic nearby amenity offering and expensive housing, Doncaster East is ripe for medium and high density development.

“It is no surprise to see Doncaster East rank highly in this research.”

In Doncaster East, the median price for a three-bedroom unit at $825,000 is well above the Melbourne median of $707,000, indicating an affluent market segment met with strong demand.

Point Cook was ranked third, its interest driven by the surge in popular and affordable house and land packages resulting in a steady pipeline of new developments expected to enter the market in the next 12 months.

Pascoe Vale and Pascoe Vale South’s position on the list was a reflection of the quantity of projects in the pipeline – a sign of rapid transformation resulting from purchaser demand seeking to acquire property within 10km of the Melbourne CBD at an affordable price point.

“Pascoe Vale and Pascoe Vale South currently have 131 planning assessments underway, however only 31 projects have approval and zero have reached a construction status as yet,” Mr Materia said.

“These statistics indicate that now would be a good time for a developer to be selling a project, especially in a market environment with minimal sales competition.

“Pascoe Vale is keenly targeted by small developers specialising in townhouse products which they can on-sell at affordable price points to end purchasers.”

Point Cook has captured the younger family demographic who have a firm necessity for affordable housing with 33 per cent of residents aged 0-19, compared to the greater Melbourne average of 25 per cent. 30-64 year olds represent 50 per cent of its demographic.

“We expect the current healthy housing demand from young families to continue within Point Cook in the coming 12-24 months.”