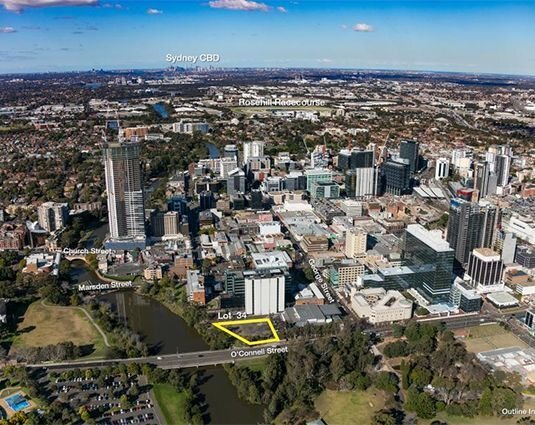 With demand continuing to outstrip supply at record levels across Australia’s largest City, three of the most significant development prospects this year have been listed courtesy of international market shapers CBRE, Savills & Cushman Wakefield.

On the whole, the metropolitan Sydney market continues to go from strength to strength, with major projects being listed throughout the sprawling City but also extending into the urban growth precincts of Parramatta, Gosford and St. Ives.

Lot 34, O’Connell Street positioned in what is increasingly being referred to as Sydney’s ‘second CBD’ in Parramatta, presents as some 3073sqm of prime mixed-use land with an accompanying concept design for 94 residential apartments in addition to over 900sqm of retail space.

As a gateway into the precincts business district, O’Connell Street is zoned B4 - Mixed Use and is situated within immediate proximity to Parramatta Square and Westfield Parramatta.

The North-facing property adjoins a picturesque public reserve fronting Parramatta River, with an expressions of interest campaign closing on the 5th of October.

2,4,6 Wilhelmina Street, Gosford is being marketed as ‘HarbourView’, indeed an aptly named title for a stunning complex combining a simplistic design aesthetic boasting 8 levels of apartment living evenly distributed across some 67 properties - with dwellings above level 5 offering unrestricted harbour views.

Offering minutes stroll into the CBD, efficient transportation links across Sydney, and strong employment and education precincts, Wilhelmina Street provides developers the proposition of capitalising on the limited luxury residential offerings whilst maximising their investment.

Situated on the North Shore, 12A,14,16 Shinfield Avenue, St. Ives is positioned within one of Sydney’s most idyllic settings - indeed a landmark opportunity rarely available on the open market.

The outstanding, well connected residential setting that is Sydney’s esteemed Upper North Shore offers developers a project positioned in a paramount location, with an exceptional development scheme and without the typical planning headaches.