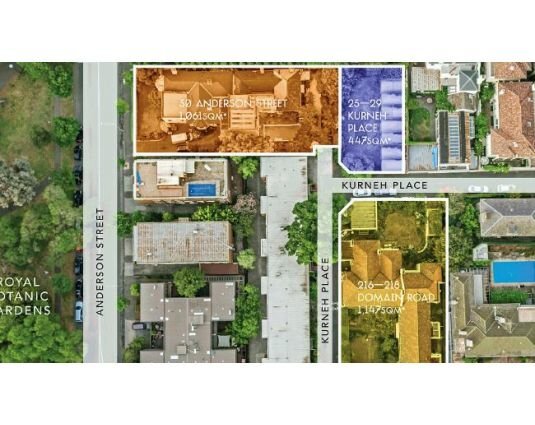 THREE historic South Yarra properties offered as one large land package have been snapped up by a Melbourne businessman for a whopping $33 million — double the price they were valued at.

CBRE senior director Mark Wizel said the portfolio had been valued at about $16 million before the “record sale”, achieved after an expressions of interest campaign.

“So to sell the portfolio for more than double that is a clear indicator of the confidence buyers have for blue chip Melbourne real estate at present,” Mr Wizel said.

The portfolio contains two houses at 216-218 Domain Rd and 30 Anderson St and eight garages at 25-29 Kurneh Place — all of which have been owned by the same family for the past 50 years.

The properties boast 15 bedrooms, eight bathrooms, 10 car parks and a swimming pool between them. They’re flanked by the Royal Botanic Gardens, Fawkner Park and the Yarra River.

Mr Wizel said he had received more than 40 offers in different combinations for the properties, which had the option of being sold separately or together.

They were being offered as one portfolio because their owner Marion Page — the daughter of prominent businessman Sir Clive McPherson — had died last year and they were all tied up together.

Buyer Mr Sadikay said he was not yet sure what he would do with his new land holding. But he suggested an apartment development may be on his radar by noting there had been an upswing in interest for larger apartments in Melbourne’s top-end suburbs.

The businessman, who also owns surfwear store Ozmosis, said he said “admired the location of these properties for some time”.

“I am currently renovating my own house up the road on Anderson Street,” he said.

“I love this part of Melbourne and everything that we investigate in terms of the properties’ potential will take into account what makes this area so special and so desirable for people to live in.”

Jellis Craig director Andrew Macmillan said the properties had been “the most hotly contested campaign” he’d been involved in over the past decade, if not his career.

The sale came at the end of Melbourne’s biggest auction week since November, in which 1784 auctions were held, according to CoreLogic RP Data.

The city recorded a strong preliminary clearance rate of 72.3 per cent — up from 68.6 per cent last week when just 420 residential auctions were held.