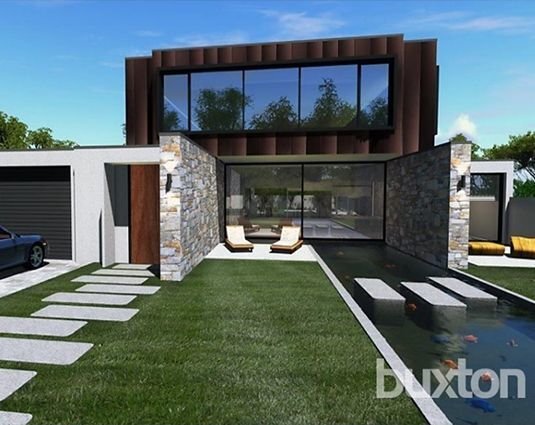 Brighton’s golden mile has long been considered one of the most extraordinary stretches of real estate in Victoria, with stunning skyline views of Melbourne’s sprawling CBD combined with magnificent retail and transportation links offering it’s residents a rare lifestyle that is enjoyed by so few but desired by so many.

Eleven Kent Avenue is no exception to the rule, boasting a unique, vacant parcel of land with existing plans and building permits in place for a stunning architecturally designed, resort inspired retreat across nearly one thousand square metres (963).

Critically acclaimed within elite Melbourne circles for their previous work on ‘The Block’  television series, Brenchley Architects have formed a contemporary masterpiece that encompasses the flexibility to create four or five bedrooms depending on the desired configuration sought by potential purchasers.

Beginning in the underground garage wherein a customised car lift transports you down and into one of the six car spaces provided, a dedicated games / media room also complements this level providing an ideal scenario for families with children or perhaps the husband seeking their very own adaptation to the popular ‘man cave’ concept.

A private lift from the garage seamlessly elevates you to the state of the art kitchen and walk-in pantry on the ground level, whilst an elegant living zone overlooking a spectacular reflective pond is also a stunning inclusion.

Continuing on the ground level, a second peaceful living space deliberately positioned on the edge of the accompanying lap pool and spa provides residents the ability to unwind from the day with the serene sounds of an endless waterfall situated only metres away.

A guest wing complete with it’s own private terrace, an executive office, a sprawling dining room with an adjacent walk-in wine cellar and a gym pod providing a yoga studio, sauna, steam room & shower and a private meditation deck are undoubtedly some of the finest inclusions one could expect to see in this modern iteration of luxurious living at its absolute pinnacle.

The upper level highlights three superb bedrooms, with the main fitted with a walk-in robe and private ensuite, whilst a central bathroom and study area are also strategically positioned in line with the broader aesthetic of the home.

In an exclusive Golden Mile cul-de-sac, within one hundred metres to the Brighton foreshore, running and bike tracks, the North Road Pavilion, parklands / playing fields and the Brighton Yacht Club, Kent Avenue is one of the last and most substantial examples of premier Bayside living.