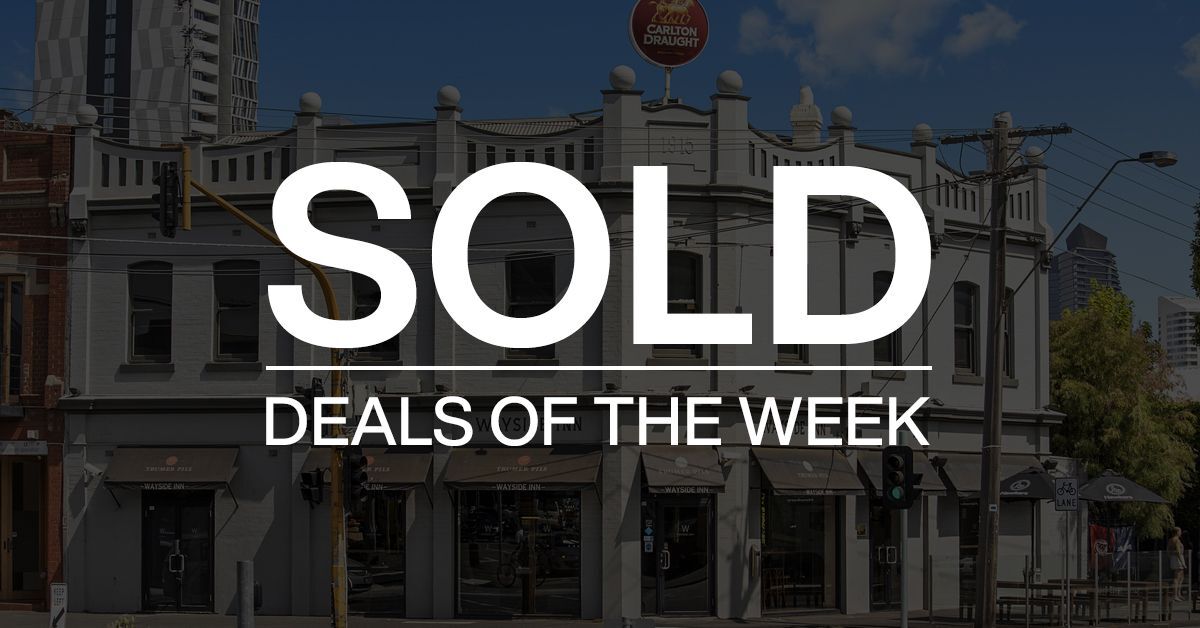 GEELONG - $4.5 million
The 130-year old former Geelong Post Office has traded ownership, now in the hands of town local Bill Votsaris who spent an estimated $4.5 million for the asset.

The City of Greater Geelong offered the property, located at 83 Ryrie Street for sale or lease seven months ago. Mr Votsaris has announced plans to convert the historic building into a $20 million boutique hospitality complex through his development company Batman Management Group.

Located at 18/518 Mount Dandenong Road, the supermarket occupies a large building area of 2,183sqm with significant retail frontage and includes an internal Liquorland. The site benefits from an ample at-grade car park for 215 vehicles and a range of neighbouring complimentary retailers which are focused on essentials and convenience.

The property was sold by Rick Silberman and Steven Lerche of Savills Australia.

SOUTH MELBOURNE - Undisclosed
The freehold opportunity of a long-standing South Melbourne pub, has sold for the first time in over 25 years.

The Wayside Inn, located at 446 City Road in South Melbourne, marks a first for Melbourne and continues a recent run of national hotel sales. JLL Hotels & Hospitality Group were exclusively appointed to market the property, following successful campaigns at Forresters in Surrey Hills NSW, the Elephant Hotel in Brisbane QLD along with a soon to be announced sale of a prominent Leasehold Gaming hotel in Bayside Melbourne.

Occupying a prominent 587sqm corner site on the busy intersection of City Road and Ferrars Street, the property presented in excellent condition with features including a large public bar area, dining room with adjacent courtyard and beer garden, an upstairs function room with a dedicated bar and outdoor rooftop area.

WEST RYDE - $22.92 million
The West Ryde showroom and service centre has traded hands from Servco to EG for close to $23 million, with a 15-year leaseback.

The property, located at 1044-1050 Victoria Road, is serviced as a Toyota car dealership and marks another automobile asset divestment by car dealer firm. The new owners have announced plans for a refurbishment.

CBRE was the marketing agency.

FRESHWATER - $4.87 million
A strata-titled shopping arcade in Freshwater, 17km north-east of Sydney’s CBD, has been picked up by a local investor for $4.87 million.

Freshwater Village, as the property is known, encompasses 807sqm at Lot 1, 1-3 Moore Road Freshwater, and is leased to rock climbing centre Skywood who has options until 2040. The asset received more than 160 enquiries, with its strong leasing profile and sought after locality said to have been the main motivators.

WILLAWONG - $41.5 million
One of the world’s largest Caterpillar equipment dealers, Hastings Deering has sold a 21.25 Ha parcel of land in Brisbane’s south for $41.5 million. The industrial development site at 182 Bowhill Rd, Willawong, 16km south of Brisbane, has been purchased by a domestic entity.

With broad General Industry B zoning, the landholding was one of the last of its type and size available within the tightly-held greater Brisbane area. The transaction includes a short-term leaseback to Hastings Deering, which is based in Archerfield and had already undertaken major works at the site.

WOOLLOONGABBA - $3.7 million
A five storey office building in Brisbane’s Woolloongabba has traded hands from one private local investor to another for $3.7 million.

On a total site area of 607sqm in Woolloongabba, on the city’s southern fringe, 40 Nile Street has an NLA of 877sqm and offers car parking for six vehicles, generating a total passing net income of $240,672 annually. The Post Lounge, film and television post-production company have signed on for a brand new six-year lease with options.

SORRENTO - $2.4 million
Private Queensland investors have snapped up the Riviera Shopping Centre in the Gold Coast suburb of Sorrento for $2.4 million.

The asset, which included six tenancies, a 465sqm building area, and was owned by private Victorian investors for over 30 years, was sold to an experienced shopping centre investor who was drawn to the asset due to rental reversion opportunities and development upside.

BALCATTA - $59 million (+$4.5 million)
Charter Hall Direct has announced that its Direct Industrial Fund No.4 (DIF4) has settled with Brownes Dairy for a processing facility in Balcatta for $59 million. Further contracts have also been exchanged for a parcel of adjoining, undeveloped land with a price tag of $4.5 million.

ADELAIDE - $47.2 million
An office building in Adelaide’s CBD has changed hands for $47.2 million, in what is the first major CBD office investment transaction completed since the onset of COVID-19.

The property known as NAB House, at 22-28 King William Street, was purchased by Intergen Property Group on behalf of a Singaporean family office from Southern Cross Equity Group Pty Ltd. The building will remain home to NAB, who occupy over 60%, with the State Government and a mix of high quality corporate tenants making up the balance.