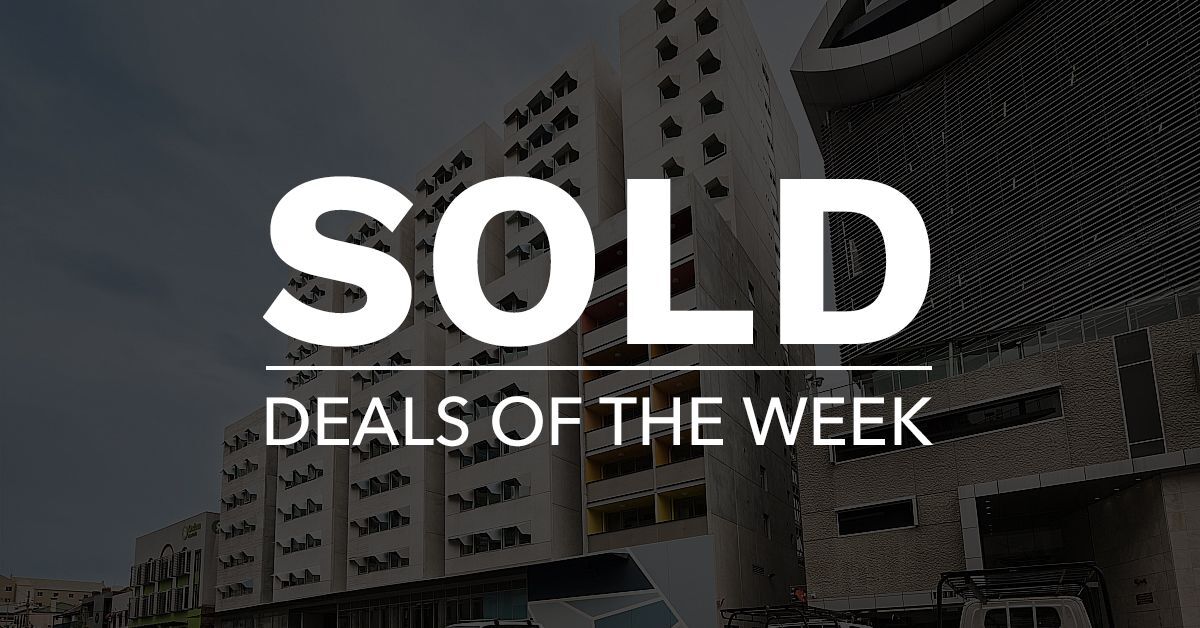 The student accommodation sector has been hit quite hard by the COVID-19 virus period, and has seen many offshore students unable to continue their Australian university courses as planned. However, the move by Allianz is a sure indicator that there are early signs of a shift towards recovery.

The towers were developed under the Journal Student Living banner and previously held by South African company Redefine Properties and Melbourne-based partner Citiplan Property with a 90/10 split. The facilities have a total of 1,391 beds; the Leicester Street building contains 804 beds and was completed in 2018, while the Swanston Street asset holds 587 beds and was completed in May this year. The towers sold for $269 million and $190 million respectively.

JLL were enlisted for the sale.

MELBOURNE - $108 million
Caydon has offloaded another Melbourne hotel, this time in the city. The Vibe Hotel Melbourne has changed hands, trading from Caydon to Sino Pacific Trading Company Limited for a speculated $108 million.

Located at 1-5 Queen Street, the Melbourne hotel opened its doors in May 2020 and offers 206 rooms, a bar, gym, indoor swimming pool, restaurant and conference facilities across 23 storeys. Original proprietors Caydon reportedly purchased the 737sqm landholding in 2016 for $18 million; at the time of sale, the site had approval for a residential project. The sale follows the sale of Caydon’s 97-suite hotel in Sebel Moonee Ponds seven months ago.

DANDENONG - $29.1 million
The Village Dandenong Shopping Centre in Melbourne’s south-east has sold to a Chinese private investor for $29.1 million.

The off-market transaction was brokered by JLL’s Stuart Taylor and MingXuan Li.

“The neighbourhood shopping centre market has demonstrated liquidity in the first half of 2020, with pricing remaining firm. Transactions have been driven by the defensive nature of the income streams and the continued ability to access cheap debt.

GLEN IRIS - $5.68 million
A Glen Iris landholding has changed hands to an interstate developer for $5.68 million. The 1,700sqm inner-suburban landholding, located at 1542-1544 High Street, was offered with permit approval for a residential project comprising 22 apartments and a total net saleable area of circa 2,619sqm.

The landholding was sold on a short 30-day settlement to a Sydney-based developer of Asian heritage, who beat out 14 bidders. The sale price reflects a strong rate of $261,523 per unit.

EAST RIVERSTONE - $5 million
A priory, complete with its own chapel and 32-bedroom homestead, has recently changed hands in a deal worth reportedly around $5 million.

Located at 325 Garfield Road in East Riverstone around 48km north-west of Sydney, the two-hectare property was first purchased 34 years ago by the Tyburn Nuns, an order known for maintaining long periods of silence. Back then, the site was semi-rural, but it now sits in the middle of a rezoning precinct opposite the Box Hill Town Centre. The nuns have opted to move to a quieter pocket of the Hawkesbury region.

The property is zoned RU4 and has a number of potential uses including as an exhibition village, garden centre, group home or childcare facilities.

BEACONSFIELD - $3.3 million
An owner-occupier from Melbourne in the medical industry has snapped up an A-grade showroom/office/warehouse at 360-364 Botany Road in Beaconsfield for $3.3 million.

The asset, that came with 547sqm of building area on a 510sqm land size, provides immediate proximity to the new Green Square Town Centre and is very close to many new economy enterprises at nearby business hubs in Beaconsfield, Rosebery and Alexandria. The successful purchaser bought the asset ‘sight unseen’ and had at no point personally inspected it.

The property was marketed and sold by Ray White Commercial’s Kristian Morris and Alex Santelli.

GOSFORD - $2.205 million
NSW Government land that was surplus to requirements has sold for $2.205 million under the hammer at 11-15 Ward Street in Gosford.

The asset offered an exciting opportunity to acquire a substantial site of 2,764sqm with two street frontages in Gosford’s growth corridors. The asset was marketed with potential uses such as residential unit developers, boarding houses, and childcare operators. The campaign attracted more than 100 enquiries and that led to nine registered bidders battling it out on the day.

ASHGROVE - $8.88 million
A Melbourne investment group has swooped in to secure a retail and medical centre in Brisbane’s upmarket Ashgrove for $8.88 million.

Situated at 9 Ashgrove Avenue, the 800sqm building sits on a 618sqm landholding and was sold fully tenanted to Ashgrove Clinic healthcare operators and Bank of Queensland with an 8.5 year weighted average lease expiry.

WYNNUM - $2.2 million
The last two remaining lots at Wynnum’s Port View Estate have sold for $2.2 million to a developer looking to build a corporate unit development at 11 and 21 Industry Place.

The final two deals completed the balance of the estate with 11 available lots successfully sold and settled for a total of $11.2 million.

“Wynnum is the place to be right now if you’re looking for a base for your business – with the Port of Brisbane in close proximity.” Mr Highman stated,

“Wynnum Road literally runs from the coast, all the way through to the CBD, so it provides the ideal thoroughfare for businesses.”

SUBIACO - $15.5 million
A private investor has capitalised on a development site in Subiaco, snapping up the former supermarket site at 277 Barker Road for $15.5 million. JLL sales agents noted that the result represents a significant uplift on book value and was achieved with more than 80 enquiries and multiple bids.