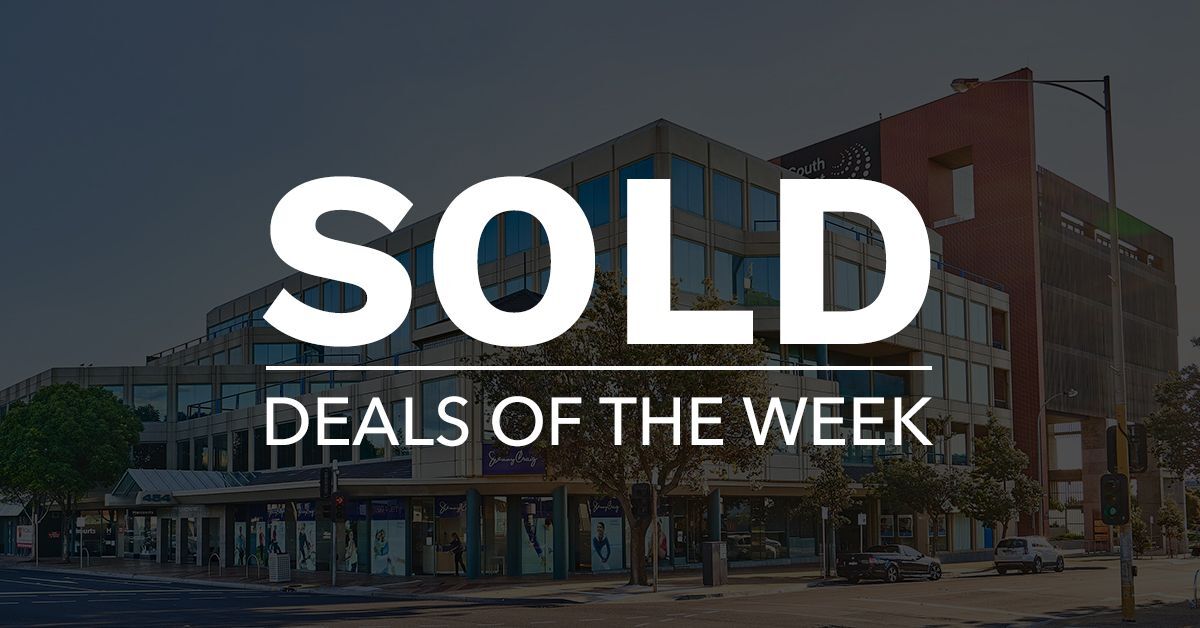 Located within Yarraville’s industrial centre at 4 Cawley Road, the standalone commercial building offers 1,642sqm of NLA on a 4,454sqm corner site. The property is leased to the West Gate Tunnel Project.

ELSTERNWICK - $2.5 million +
A shop on Glen Huntly Road in Elsternwick has changed hands for more than $2.5 million, amid an increase in demand for space in Melbourne’s suburban strip retail market.

CBRE’s Rorey James noted “there has been a noticeable increase in enquiry from retailers for open-air spaces”.

“This latest sale in Elsternwick is one of the strongest we’ve seen in the Melbourne market this year, and highlights the demand for strip retail properties,” Mr James said.

FRANKSTON - Undisclosed
National property investment group, Collective Capital, has snapped up one of the most significant office buildings in Melbourne’s south-eastern bayside with the off-market purchase of a Frankston property valued at circa $20 million.

Located at 454-472 Nepean Highway, the property comprises a five level, 6,254sqm building with ground floor retail on a 2,501sqm landholding with three street frontages and parking for 142 cars. The largely government tenanted building was sold 78% leased with a net passing annual income of nearly $1.24 million.

“This was an astute purchase which delivered a very satisfying level of income security at a time when income security is at a premium across all types of investment classes.

“Interest in this and other so-called defensive income properties, especially nondiscretionary retail, has risen markedly in recent times and will continue to escalate whilst uncertainty remains,’’ Mr Wizel said.

Holding address at level 4/71 York Street, the property comprises of 692sqm of NLA. There are 13 strata suites in total across the five-storey building.

Located at 3-5 Parramatta Street, the 1,530sqm property is currently comprised of two double-storey apartment blocks and holds a an approved DA for a five level residential complex. Designs allow for 25 units, mostly configured as a mix with two and three bedrooms.

Chris Orr of Savills Australia sold the property and advised “There is pent up demand for quality property in Sydney’s North Shore. With 62 inspections over a six day period and a result 12% higher than the client’s expectations, it certainly feels like we’re at the start of another bull market.”

The warehouse, located at 1677 Beenleigh Road, was originally listed early last year with a six month leaseback. VIMG has announced plans to replace the 9.7 hectare property with a mix of residential and commercial stock. They are currently inviting registrations of interest for the project.

PENRITH - $17.25 million
A Penrith manufacturing plant belonging to Visy has been offloaded for $17.25 million with a leaseback. Sydney based private investor Sandran Property Group are overtaking ownership.

The 4.2-hectare site, situated at 126 Andrews Road, comprises an 8,956sqm office/factory which covers just one fifth of the site. It will return an annual rent of $1 million, with Visy also offering to remain as tenants until 2027, with options.

TEWANTIN - $1.025 million
An interstate investor has snapped up the freehold of the long-standing Tewantin Market Garden on the Sunshine Coast for $1.025 million at Shop 2/93 Poinciana Avenue.

The asset, that was completed in 2016 and formed part of the ‘Tewantin Place’ strata complex, offered a 142sqm building area and was sold fully leased.

The West Perth asset represents an A-grade commercial property, sold with lease to EBM (Elkington Bishop Molineaux) Insurance Brokers. The 1,863sqm landholding offers 1,423sqm of NLA and has an open-air car park. MPF have announced plans to redevelop the site.