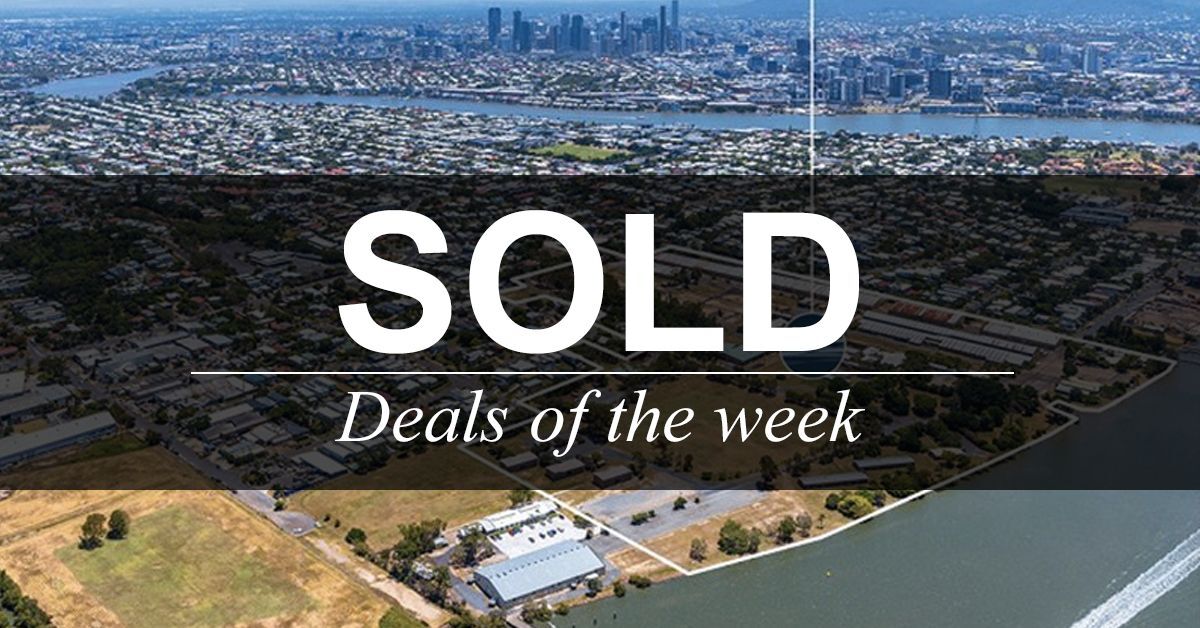 TRUGANINA - $23.1 million
Funds management giant ISPT recently payed $23.1 million for a 40-hectare site in Truganina, adding further asset to their Melbourne industrial landbank portfolio. The purchase of 744 Boundary Road, which was acquired from the Mifsud family, is the second large industrial property bought by the company this year.

The site is currently unzoned, but holds a prominent address next to the proposed site for the Western Interstate Freight Terminal (WIFT). It is also just down the road from Fraser’s recent $27.5 million Tarneit acquisition.

SOUTH MELBOURNE - $10.2 million
Just one year after purchasing a landmark South Melbourne property in 2018 for $6 million, the owners have sold it on to a local investor for $10.2 million.

Will Leaf and Toby Ewert, architects, and Ed Farquharson, owner of the property development firm Moda, had intentions to refurbish and sell the asset, but these plans have changed. Mr Leaf and Mr Ewert's architecture firm, Ewert Leaf, will continue to lease the four-level building at 49-51 Stead Street on a seven-year lease at a net annual rent of $556,348.

Colliers International's Ted Dwyer, Ben Baines and Daniel Wolman, and Gross Waddell's Alex Ham and Michael Gross, managed the sale which was successful after just 20 days of listing the asset.

MITCHAM - $7.1 million
A strata titled childcare investment in Mitcham has sold off-the-plan for $7.1 million to a Chinese investor. Local developer Sector Property Group were responsible for delivering the mixed-use project, which comprises self-storage units and offices in addition to the childcare centre, positioned within an evolving industrial precinct.

Construction is underway for 14-16 Simla Street with completion expected in mid-2020, and the purchaser will enjoy a commencing rental of $545,000 per annum plus outgoings.

Savills Australia agents Jesse Radisich, Benson Zhou and Mark Stafford negotiated the sale, saying that the transaction represented a landmark sale in the area and signalled strong continued demand from investors in the childcare sector.

TRUGANINA - $3.5 million
Melbourne outer-west continues to show its strength in the industrial property sector, as two neighbouring properties in Truganina sell for a combined $3.5 million.

Property developer and fund manager 7Nine Investments passed the assets at 19 and 21 Efficient Drive to a Sydney-based investor who has purchased three buildings in the suburb over the past 18 months.

The acquisition is subject to several conditions, which include gaining approval by the Foreign Investment Review Board. It is expected to be completed by early December 2019.

Situated at 2-6 Cavill Avenue Ashfield, both buildings are fully leased to the NSW Department of Family and Community Services and deliver a net income of $3.54 million until 2021 with options. Shayer was apparently drawn to the properties for their development upside.

ST LEONARDS - $32 million
A St Leonards office block has been recently traded to some private Hong Kong investors for around $32 million.

The 2,079sqm block, situated at 34-36 Chandos Street, is one of three north shore office properties to be sold in the past week. While not prime CBD properties, office blocks in St Leonards and Crows Nest are desirable and considered strategic due to their position within priority precincts that will offer development uplift down the track.

EAGLE FARM, PARKINSON, CRESTMEAD - $100 million +
JLL have indicated that Queensland’s industrial investment market is beginning to boom with an 18% rise in national investment sales since last year and an industry first record of three sales over $100 million.

Tony Iuliano, JLL’s Australian Head of Capital Markets & Logistics, said there had been approximately $1.9 billion in national sales above $10 million since the start of 2019 and Queensland has accounted for 33% of these sales showing significant growth since last year.

NUNDAH - $4.2 million
An 8,523sqm mixed-use development site in Brisbane's Nundah has been picked up by a Toowoomba-based private developer for $4.2 million.

The developer has lodged a development plans with the Brisbane City Council, seeking approval for a facility comprising childcare, indoor sport and recreation, healthcare, and office.

DULWICH - $3.215 million
An 810sqm single storey office building with an additional underground level for parking, in Adelaide’s inner-east, has sold for around $3.2 million.

The property, situated at 249 Greenhill Road in Dulwich, offered a total site area of 1,150sqm and was sold with vacant possession.

The property has a total land area of 2,894sqm over two titles and is currently leased to five individual tenants, including a SipnSave, returning an annual income of approximately $151,000.