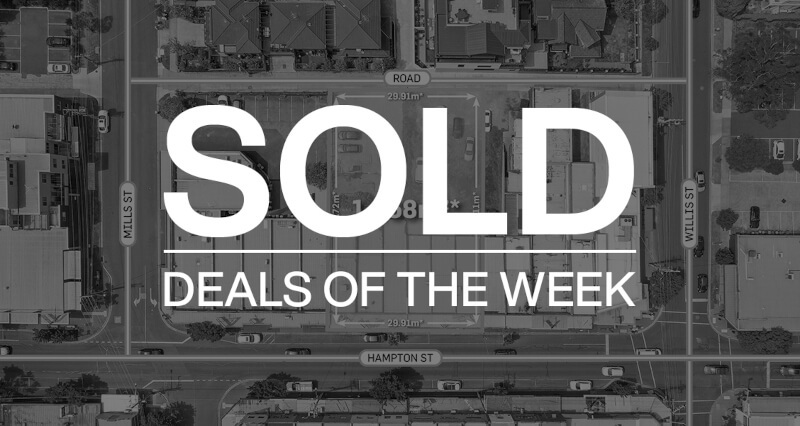 The five-star Primus Hotel in Sydney’s centre has traded from Greenland to Pro-Invest Group for $132 million, following the collapse of a proposed $140 million deal to Qatar Airlines.

Located at 339-341 Pitt Street, the five-year old facility forms part of the mixed-use Greenland Centre which upon completion will contain the city’s tallest apartment tower.

Situated 1km north of the Parramatta CBD, on the high-profile corner of Victoria Road and Church Street, the centre is anchored by a strong-performing Coles supermarket. It has a gross lettable area of 5,570sqm and features its own 196-space car park.

C19, 38-48 MacArthur Street is set to be used as their new headquarters with the property comprising a modern ground floor office within the iconic heritage-listed Dalgety Square. The office was acquired with vacant possession and reflected a building rate of $6,978 per square metre.

The deal was negotiated by Savills Australia’s Ollie Ridley and Nick Lower.

An interstate owner occupier has expanded its footprint in the Melbourne market after purchasing a 1.6 Ha site in Dandenong South for around $8.16 million to develop its newest facility.

A building product specialist plans to develop a state-of-the-art facility spanning 8,000sqm on the property, situated at Lot 6, 91 Colemans Road. Upon completion, the facility will be used as its new Melbourne headquarters for production and distribution.

CBRE’s David Aiello and Patrick Noone negotiated the off-market transaction on behalf of Chadwick Investments. The sale reflected a record land rate of circa $510 per square metre for Dandenong South.

Strong buyer competition has resulted in the sales to an offshore investor of two shops in Melbourne’s ‘The Edition’ building for a combined total of $2,608,713.

are leased to hospitality tenants Delhi Streets and Hunters Roots and were sold with five- and six-year leases respectively. The respective net incomes are $77,715 and $44,900 per annum.

The Freehold Going Concern of Cleveland Winery in Victoria’s pristine Macedon Ranges has sold, marking yet another milestone in market confidence to the Victorian Regional Tourism & Leisure industry.

The asset is set on an enormous 40.3-hectare site at 55 Shannons Road Lancefield, with facilities including 50 guest rooms, 7 function spaces, restaurant, and a cellar door with a working vineyard of varying grape variety. The successful bidder was renowned and award-winning boutique hotel specialist, Lancemore Group

JLL’s Nick MacFie and Will Connolly managed the campaign.

The popular Hampton Street shopping strip is set for a new chapter, after neighbouring owners joined together to create and sell a 1,358sqm site in a generational deal.

The site comprised six separate shops ranging from 75sqm to 94sqm, some occupied on monthly tenancies, others vacant, and one with tenancy subject to a development clause.

The purchaser is expected to make use of the favourable development potential of the site with Commercial 1 zoning and a highly attractive DD 012 Development Overlay promoting four-storey developments.

The price was undisclosed, but a very strong result is believed to be achieved on the basis of expectations of $8 million-plus.

Helmsman Invest has divested a 2.17 Ha industrial site to a self-storage business, receiving $8.8 million as a result.

Next to the busy Morayfield Woolworths, the leased facility features approximately 7,466sqm of warehouse space over multiple buildings, returning a secure income and offering development upside.

A private investor has purchased a 3,571sqm industrial manufacturing facility in Tingalpa for $7 million.

Located at 36 Proprietary Street, the property is currently occupied by Polyfoam who manufacture polystyrene foam packaging. They have had a long 13-year lease in place with approximately 4 years remaining. They had relocated to larger premises a year ago in Darra and were trying to sub lease the property, but they chose to return to the property with demand within their business rapidly on the increase.

The deal was negotiated off market by Savills Australia’s Shaw Harrison.

The commercial market north of Brisbane, the suburb of Eagle Farm in particular, remains in great shape with another stellar sale as 87 Links Avenue South sold for $3.85 million.

The property, which came with a 1,880sqm building GFA on a 5,162sqm land area, was picked up by a local developer who intends to enjoy the income, as well as land-banking the site for the future.

Located at 35 Minilya Parkway, the Greenfields Commercial Centre sits on a 8,801sqm site and features three buildings that are currently leased to strong multinational retail and medical tenants, McDonald’s, Caltex and GenesisCare.

The Glenfield Shopping Centre in WA’s Midwest has changed hands for $10.4 million.

Located just north of the regional town of Geraldton, the centre is anchored by a strong performing IGA and drive-through Cellarbrations liquor store – both on new 10-year leases. With an additional eight specialty tenants, the sale reflects a secure long-term income stream of more than $800,000 per annum.