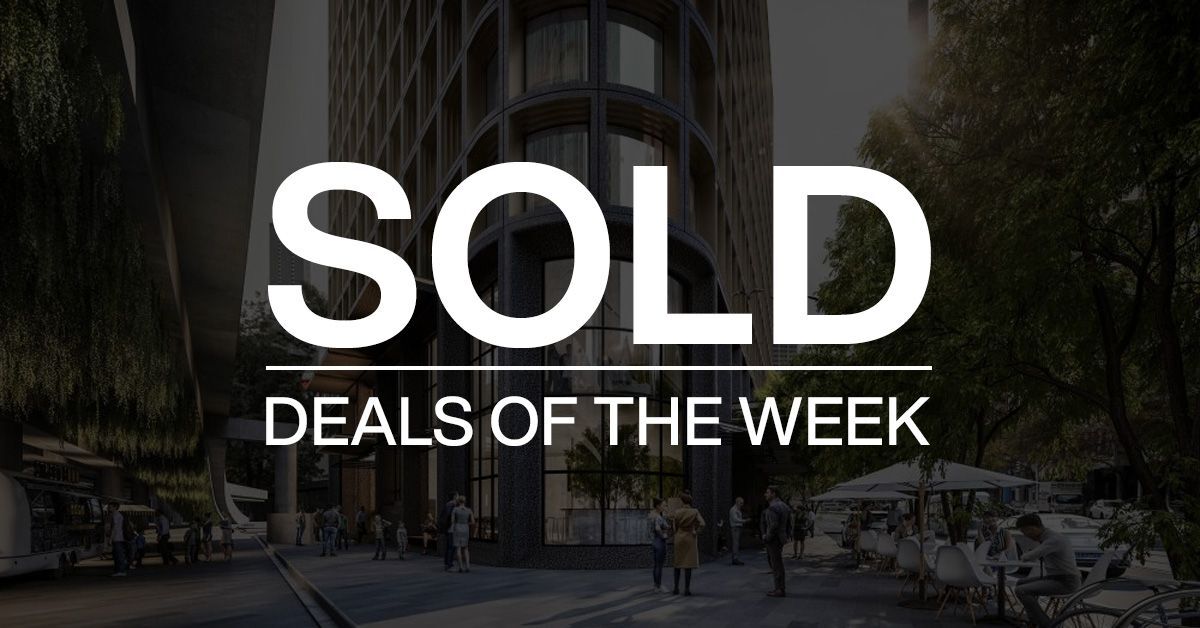 MERRIFIELD - ~$83 million
A distribution centre in Melbourne's north, that was built by German supermarket group Kaufland but was never occupied, has sold for around $83 million to Fife Capital.

Kaufland paid $33.6 million for the 28-hectare site, which is located in MAB Corporation's Merrifield Business Park, in June 2018. The supermarket group had planned to invest $459 million in its Melbourne logistics hub, but has since decided to pull out of the country.

The 90,000sqm automated, temperature-controlled facility is one of the biggest of its kind in the country. Fife Capital have already struck a deal with distribution giant DHL to lease the entire facility on a 10-year term. It is believed that the sale price reflects half of what Kaufland spent developing the site.

Located at 84-90 Queens Bridge Street, at the intersection with Kings Way, the developer has already committed to plans for a 62-level apartment tower, working with Callum Fraser for a new design. The site previously held approval for a 41-level residential building, known as 88 Melbourne.

The purchase was negotiated directly with the vendor.

BALWYN NORTH - ~$3 million
A luxury residential project with approved permit and endorsed plans for 8 high end apartments, located at 94 Doncaster Road in Balwyn North has sold for circa $3 million.

The 907sq m site, with the approved project which has been designed by award-winning ‘Nicholas Day Architects’ and was sold to an active local developer.

Mr Heatherich noted “There has been a clear increase in sales activity and enquiries as developers in particular look to build on their pipelines for 2021 and beyond.”

GLEN IRIS - $2.9 million
A local developer has secured a boutique apartment development site with a permit in place for 11 luxury apartments in Glen Iris for $2.9 million from a local owner.

Located at 48 Edgar Street, the 1.007sqm site is within direct proximity to some of the city’s most renowned retail and lifestyle precincts and elite schools.

BEACONSFIELD - Undisclosed
The Beaconsfield Hub retail centre within the growing Cardinia Shire to Melbourne’s south-east has sold for a yet-to-be-disclosed amount. Over 120 enquiries were received for the centre amid the Stage 4 lockdown period.

Located at 52-62 Princess Highway, the retail complex consists of nine separate tenants, including a nail and beauty salon, Pilates studio, pool shop, fashion retailer, community bank and three hospitality venues. At the time of sale, the centre was circa 90% occupied.

MILPERRA - $22.51 million
A half-vacant industrial investment in Milperra, 24km west of Sydney, has been picked up by a local investor for $22.51 million.

Located at 339 and 349 Horsley Road, the 3.4-hectare property offers three crossovers, a weigh bridge and diesel fuel tanks and was marketed with considerable development upside. The vacant portion of the asset encompassed 2.3 Ha with a 5,987sqm office warehouse; the incoming owner secured a new tenant on a five-year lease just before settlement.

REDFERN - $10.5 million
A refurbished former Masonic hall in Redfern on the Sydney city fringe has been scooped up by Perth media mogul Kerry Stokes for $10.5 million.

Mr Stokes' private investment company Australian Capital Equity will take control of the two-level brick building, located at 19-25 Cope Street. The asset has undergone considerable works and is currently used as an open-plan office for film production company Luscious. It is unclear if the asset will continue to be used for its intended purpose.

The asset was sold by Karbon Property’s Tom Williams and James McCourt in conjunction with JLL's John Romyn and Peter Seeto.

WETHERILL PARK - $8.1 million
An industrial property in Sydney's Wetherill Park has traded hands from ND Investments to a private investor for $8.1 million.

The 3,649sqm freestanding building is located at 468-470 Victoria Street and was sold fully leased to two tenants returning about $444,000pa.

BALMAIN - $6.65 million
An abandoned Balmain warehouse dating back to the 1930s has been snapped up by a developer for $6.65 million.

The 960sqm lot at 73-75 Beattie Street is currently occupied by a factory that started its life as a Derrin Brothers’ grocery store. Having been home to a variety of companies and industries since Derrin Brothers’ vacated in the 1950s, the building most-recently acted as an art gallery.

Its new owner intends to develop the address within Sydney’s coveted inner-west into residential apartments or terraces, having already completed a number of projects in the area.

The site was sold under the hammer through CBRE’s Adam Droubi, Matthew Fenn and Nicholas Heaton.

WOOLLOONGABBA - $37 million
The Woolloongabba Community Health Centre in Brisbane’s inner south has successfully sold for $37 million to Elanor Investors Group (ENN), and will feature as one of three portfolio properties in a healthcare retail fund worth $161 million.

Located at 228 Logan Road, the property occupies a 4150 square metre site within a major healthcare precinct, close to Princess Alexandra Hospital. The state government’s Metro South Health Department is the sole tenant of the health centre.

ENN CEO, Glenn Willis, noted that “healthcare real estate has proven to be resilient during COVID-19. As a result, we continue to experience strong investor demand for the Fund and look forward to making further value enhancing acquisitions for EHREF. We see healthcare real estate as an area of significant growth potential for the Group.”

NORTHGATE - $6.7 million
An investor has beat off multiple registered bidders to secure a brand-new industrial asset leased to Domayne for $6.07 million.

Holding address at Lots 16 and 17, Crockford Street in Brisbane’s Northgate, the asset presents a 2,358sqm building area on a 4,000sqm allotment. The current lease to Domayne returns an annual rental of $330,000pa. The campaign generated over 130 enquires with the asset also demanding attention from all Australian states and the Asia Pacific region.

ROCKLEA - $1.2 million
A local owner-occupier has snapped up a site previously occupied by Europcar for $1.2 million in Brisbane.

Located at 1468A Ipswich Road in Rocklea, the 3,028sqm asset presents a 282sqm building area and is currently operated as a sales yard and offered direct motorway exposure.

The property was marketed and sold following a leasing campaign by Ray White Commercial’s Harry Egan, who noted that “Rocklea is increasingly becoming a more desired location due to its 10km proximity to the Brisbane CBD and strategic position to nearby arterial roads.”