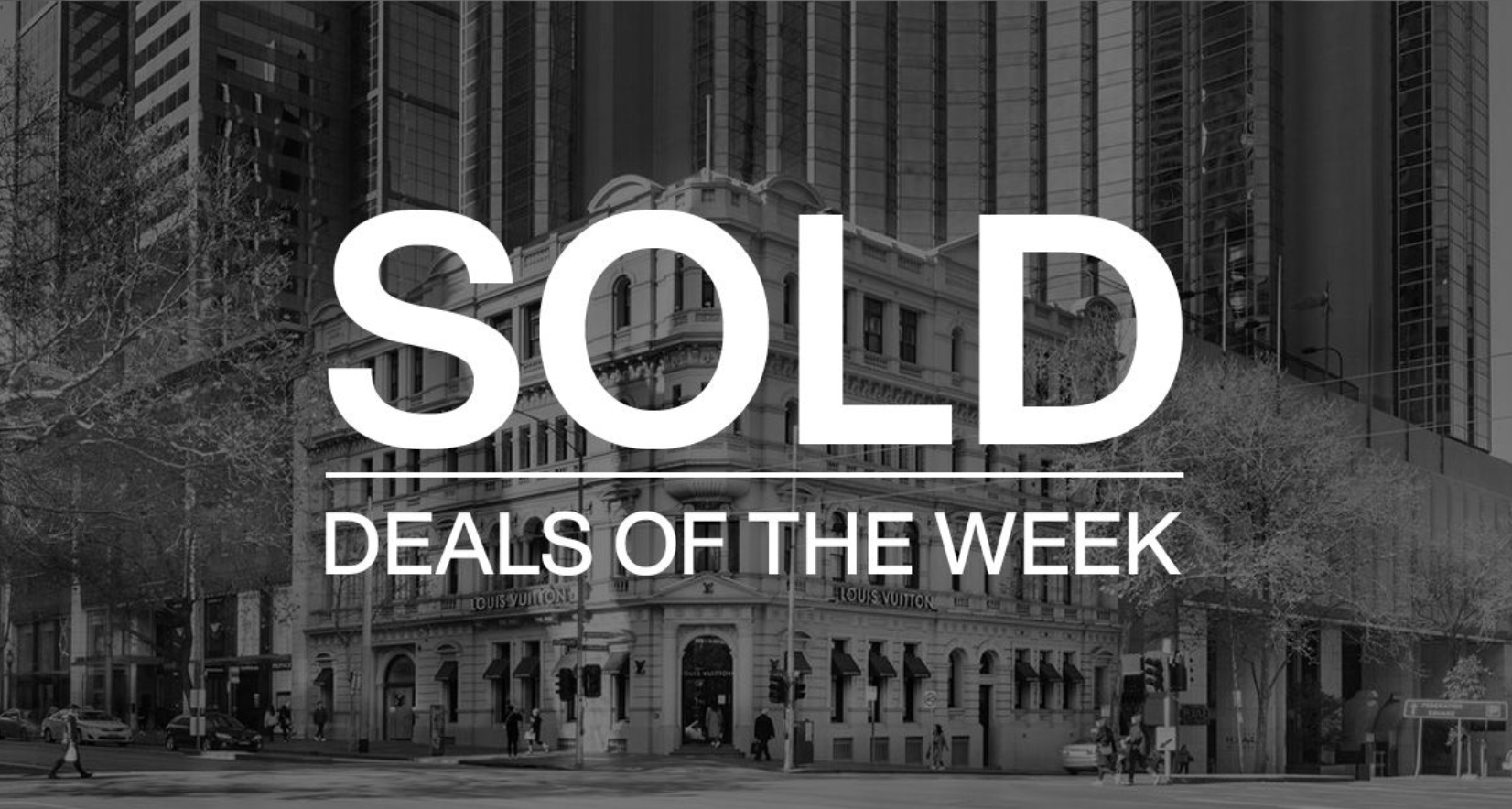 MELBOURNE - $65 million
The building that plays home to Louis Vuitton at the Paris end of Collins Street has traded hands, with a Singaporean investor swooping in to scoop up the prized asset for a speculated $65 million.

Once the home of the Alexandra Club, a private club for women, the four-storey building was built in 1886 and has a National Trust classification. Sitting in good company, the corner assets neighbours the Grand Hyatt hotel.

ST ALBANS - $2.2 million
A vacant 400sqm retail space in Melbourne’s north-west suburb St Albans has sold to an owner-occupier for $2.2 million, the first the shopping strip has seen in more than five years.

Located at 325A Main Road, the 541sqm site sits next to Chemist Warehouse and is close to the St Albans train station.

KESWICK - $103 million
Charter Hall Social Infrastructure Limited is splashing out $103 million for a currently under construction office development in Adelaide’s fringe. $23 million of the total is allocated for the land and building-to-date, with the remaining $80 million being announced for the completion of the project by October 2021.

The South Australian Emergency Services Command Centre is located at 33 Richmond Road in Keswick, on a 1.6-hectare landholding and is already majority-leased to the state government. The asset will present a 5,532sqm office adjoining a 1,000sqm warehouse adjacent to 1,468 sqm of hardstand.

PARAFIELD - $27.25 million
A four-year-old shopping centre near Adelaide’s Parafield Airport has traded hands for $27.25 million from Cromwell Direct Property Fund to Home Consortium who will add it to their Daily Needs REIT.

MELROSE PARK - $5.3 million
A corporate industrial investment property in Adelaide’s Melrose Park, around eight kilometres south of the city, has been picked up by Leyton Funds for $5.3 million.

Located at 34-40 Bennet Street, the office/warehouse complex presents five separate tenancies across a total of 3,861sqm of NLA. The property was sold fully leased.

PERTH – $55 million
Fiveight, a company of Tattarang specialising in property development and investment, has recently settled for $55 million for the acquisition of a Perth CBD office tower.

Located on the northern side of St Georges Terrace, adjacent to the heritage Cloisters building, 190 St Georges Terrace is a 12-level A-grade office building that offers more than 9,200 square metres of leasable floorspace.

“Fiveight is excited about acquiring this unique, centrally located asset in Perth’s CBD,” Mr Meredith said. “We see an attractive opportunity to invest in this building and position it as a boutique, A-grade offering for businesses looking for a St Georges Terrace presence with high quality amenity.”

190 St Georges Terrace was originally developed in 1982 by Lord Alistair McAlpine and has undergone several rounds of renovations since.

EMBLETON - $10 million
A new service centre in Perth’s north east suburb of Embleton has sold to Baron Property Group on behalf of investors for $10 million.

Located at 484 Walter Road East, the property occupies a 3,960sqm landholding that was formally a row of retail spaces. The asset was sold fully leased; Bridgestone Select Tyre and Auto, BP, and Snap Fitness.

REDFERN - $46.1 million
The global pandemic has not slowed down interest in the Australian higher education sector, with Singaporean Wee Hur Holdings buying a BP Service station for $46.1 million, with plans to develop a purpose-built student accommodation (PBSA) facility in the inner-city suburb of Redfern, just 3km south of the Sydney CBD.

Located at 104-116 Regent Street, Redfern, the site has potential to go to 18-storeys on the 1,366sqm site. The property has capacity for 384 beds, subject to council approval.

Managing Director of Intergen, Mr Dennis Kalofonos ,who  is working with Wee Hur to acquire development sites across the major capital cities of Australia, said “The development of the three student facilities will establish Redfern as one of Sydney’s most sought-after student accommodation precincts, being located close to University of Sydney and the University of Technology.

“Student accommodation is about to bounce back quickly post-COVID and Wee Hur is well placed to capitalise on the revival of this sector and the economy through its timely development and operation of centrally located student accommodation facilities in Australia’s major capital cities,” he added.

ACACIA RIDGE - $17.75 million
An Acacia Ridge industrial property has been picked up by an investor syndicate for $17.75 million. The incoming owners have already announced plans to demolish one of the offices on site and to further refurbish the improvements which will be marketed for lease.

Located at 131 Beenleigh Road, the property served as a Mitre 10 regional distribution centre and was last traded in 2016 for $26.9 million.

Located at 95-97 Edward Street, within the CBD’s Golden Triangle, the vacant four storey property offers 1,063sqm of NLA and could offer retail as well as its primary office purpose.

PEREGIAN BEACH - $1.64 million
An interstate buyer has snapped up an oceanfront tenanted investment on two titles under the hammer for $1.64 million at Shops 1&2/2 Kingfisher Drive in Peregian Beach.

Lots one and two combined were 119sqm and were part of a 261sqm building. One tenant currently straddles both lots, however the property could easily be returned to two smaller tenancies, if required.

The property was marketed and sold by Ray White Commercial’s John Petralia.

ROMA – Undisclosed
The Waratah Hotel Group has snapped up the Royal on Ninety-Nine hotel within the Maranoa Region for an undisclosed amount.

The community driven hotel is strategically located at 99 McDowell Street in the town centre of Roma, and is approximately 480 kilometres west of Brisbane at the Carnarvon and Warrego Highway intersection.

Mr Alaban said that Hotel sales as such further demonstrates that demand remains strong for quality regional assets throughout Queensland.

“Yields are still attractive when compared to southern states and demand is expected to remain strong for quality assets in 2021” he said.