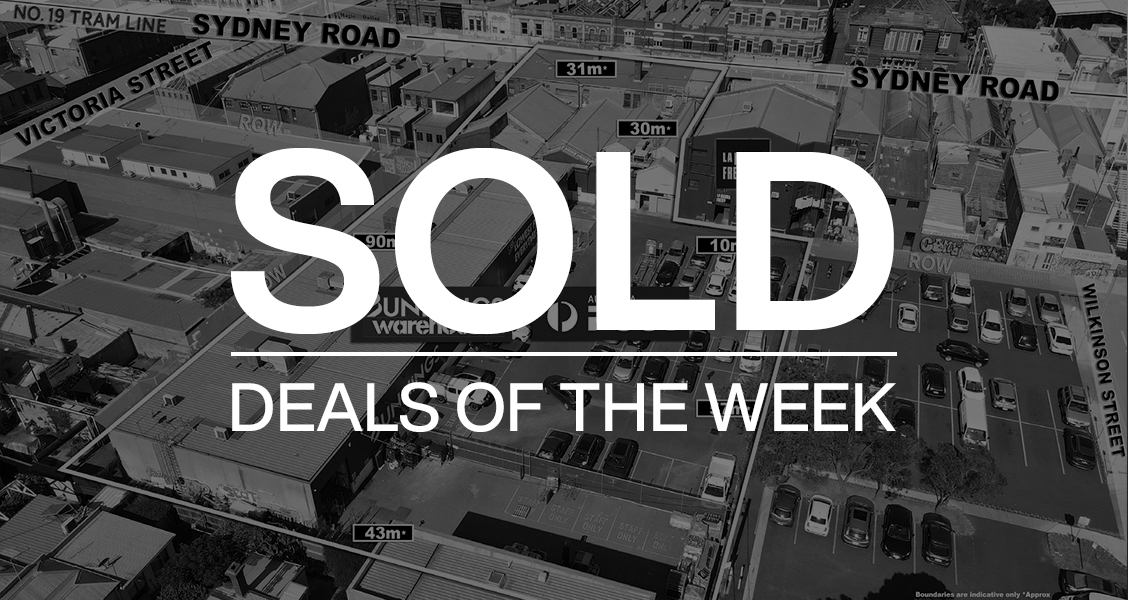 HomeCo REIT is understood to have sold a Bathurst bulky goods retail investment for $16.95 million; a $50,000 improvement on its June-2020 book value.

Vendors the Piddington family, had successfully operated their carpet business out of the property for a long period of time and have held the asset in their portfolio for over 40 years.

The property is split across three retail warehouses with a total internal area of 1,697sqm, while the site totals 3,028sqm with dual street frontage and 25 on-grade car parking spaces. Currently occupied by three tenants, the asset returns a total annual net income of $280,000.

An interstate investor has bought 409-419 Sydney Road Brunswick, a 3,700sqm tenanted by Bunnings and Australia Post for $13.82 million - just four days after the site was listed and before the campaign was officially launched.

The sale marks a record low yield of 2.86% for the sale of a Bunnings asset and reflects current high investor demand for well-located property with income and development potential.

The sale was negotiated by Melbourne Acquisitions’ James Latos and Dominic Gibson.

Developers Ouson Group have sold a development ready site in Clayton for $11.2 million; four years after picking up the site for $9.56 million.

99-121 Carinish Road has been granted approval for a nine-storey building with 9,330sqm of lettable area to be encompassed by 42 apartments, townhouses, office, retail and childcare.

A 24-unit industrial investment property in Brisbane’s south east has been picked up by EG for $32 million.

A Sydney-based investment company that owns multiple pubs on Australia’s East Coast has added the Jacobs Well Bayside Tavern freehold to their portfolio for $8.5 million.

The deal continued a trend that has seen investors from southern states pour money into the Queensland regions with the Gold Coast, Sunshine Coast, and now Bayside particularly popular.

The tavern boasts a 3,946sqm site opposite Jacobs Well Tourist Park, with a 140-seat restaurant, public bar, and 19 poker machines. It also offers a three-bedroom house and manager’s residence.

A South Australian private investor has snapped up two high quality industrial properties located within the well sought after and established industrial precinct of Noosaville for $4.1 million from a Sydney based owner.

The properties were sold by Savills Australia’s Scott Gardiner and Jason O’Meara.

A National Hotel Group has snapped up The Barkly Hotel Motel in Mount Isa from the privately-owned Irvin Hotel Group for an undisclosed sum.

The sale comes as Mount Isa’s population is expanding, with new suburbs currently being planned and developed to cater for this increase. According to local data from Mount Isa City Council, it is predicted that these new suburbs will comprise more than 40,000 people within the next 10 to 20 years.

Located at 55 Barkly Highway, Mount Isa, The Barkly Hotel Motel (“the Hotel”) is a multifaceted business consisting of gaming, food & beverage, drive through bottle shop and accommodation facilities located in Mount Isa. The Hotel sits on a 1.35-hectare site

A recently permitted building block beside Murdoch’s Fiona Stanley Hospital has been sold by DevelopmentWA for an undisclosed amount.

Hesperia and Birchmead Property picked up the site, Lot 118, which encompasses a 3,438sqm parcel and forms part of the 9.6 Ha Murdoch Health and Knowledge Precinct.

The site has been earmarked for offices, shops and 120 apartments across 10-storeys.

The first stage of the medical precinct is expected to be completed by 2023, also to be delivered by Hesperia, and will include an aged care complex, medical centre and an 80-bed Medihotel.