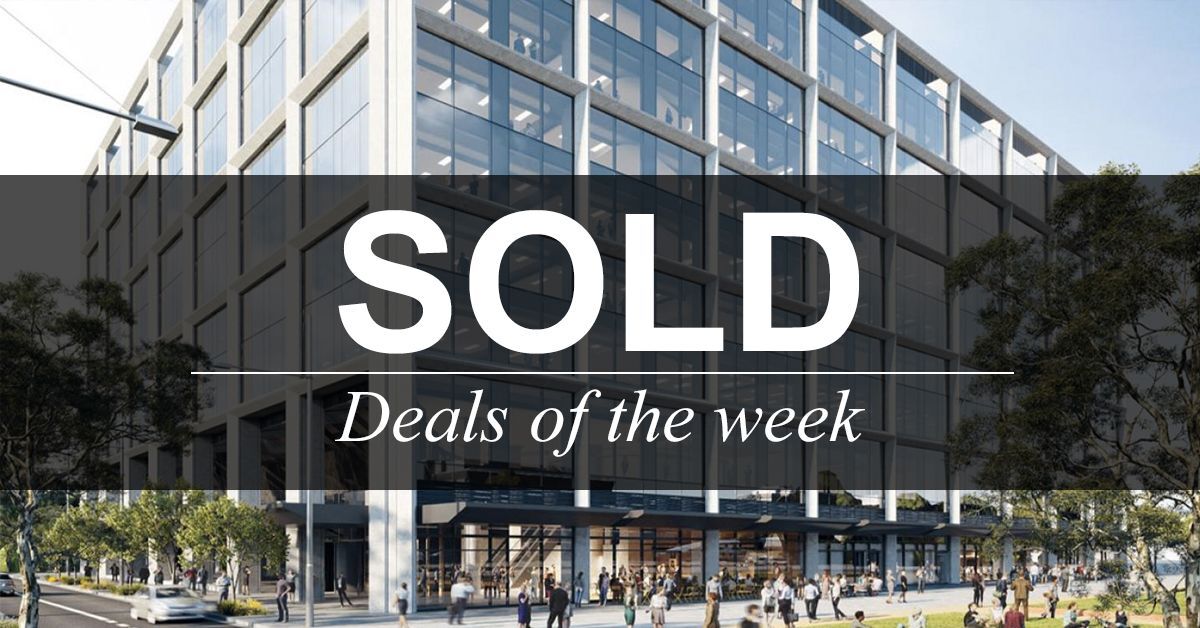 WARRIGUL - $51 million
A new large-format retail centre in the regional Victoria town of Warrigul has been secured by Newmark Capital for $51 million.

The 25,238sqm centre sits on a 5.7-hectare corner site on Queen Street and Hazel Drive, 107 kilometres south-east of Melbourne. The yet-to-be-completed centre includes nine tenancies and is 85% pre-leased, including leases to Bunnings and Kmart. Construction is expected to conclude in June 2020.

The seven-storey building holds address at 1 Bowen Crescent, and is well positioned opposite the Royal Botanic Gardens and the future Anzac metro station. The building was sold by Sydney-based DJSK Pty Ltd, which bought it for $13.6 million in October 2017.

DEER PARK - $1.26 million
A recently completed office-warehouse in Melbourne’s west has been picked up by a private owner for $1.26 million.

Located at 7 Zacara Court in Deer Park, the property comprises of a 724sqm warehouse and 234sqm office, with a container-height roller door, three-phase power and 11 parking spaces.

SYDNEY - $331.3 million
Charter Hall has recently signed off on an off-market property acquisition, securing two 50% stakes in the Glasshouse office building in Sydney's Macquarie Park for a total of $331.3 million.

The Glasshouse building is located at 45-61 Waterloo Road and is substantially pre-committed to the NSW government on a 12-year lease.

The three buildings are fully leased and comprise a combined NLA of 10,000sqm, but could eventually deliver around six times that after development, Stockland's commercial property head Louise Mason said,

"Subject to approvals, the amalgamated Walker Street site will have the potential to accommodate up to 60,000 square metres of prime office space in the future."

RABY - ~$35 million
Long-time owners, the Walker family, have parted with the Raby Tavern and shopping centre in Sydney's south-west, trading it for around $35 million to the De Angelis family.

The 8,000sqm Raby property was on the market for just two weeks before settling to the De Angelis Hotel Group. Market expectations were at around $30 million, highlighting the current strength of the pub real estate market.

The Raby Tavern comprises of 28 poker machine licences and is the only pub in the 20,000-resident suburb, situated 55km south-west of the Sydney CBD.

EASTWOOD - $7.5 million
A high-profile retail asset in Eastwood achieved tremendous results at a recent auction, selling for $7.25 million. The 340sqm property, located at 159 Rowe Street, had been held by one owner for 40 years, and the same tenant since the early 1990s.

The auction attracted more than 150 people, with bidding starting at $3.5 million before closing at $7.25 million.

MT OMMANEY - $94.5 million
Vicinity has sold a 25% stake in their Mt Ommaney Centre in Queensland for $94.5 million to YFG Shopping Centres Pty Ltd.

Located 14 kilometres south-west of the Brisbane CBD, the Mt Ommaney share sale was one of two recent major Vicinity moves, following the $101 million sale of Corio Central in Geelong, Victoria.

Vicinity chief executive officer and managing director, Grant Kelly, said the disposal of these two non-core assets “is in line with our strategy of focusing our portfolio on market-leading destinations,” and will ultimately allow them energy to focus on their larger assets.

Vicinity has divested interests in 37 non-core assets for $3.3 billion at a combined 0.7% premium to book value, Mr Kelly said, adding that the sales are the continuation of a strategic portfolio refinement.

UPPER MOUNT GRAVATT - $7.5 million
A 2,484sqm commercial building located at 2092 Logan Road in Upper Mount Gravatt has been traded to the DPA Property Group for $7.5 million.

DPA already owns the adjoining building and have announced plans to refurbish and lease the new acquisition. The building sits on a total 3,976sqm land area and has parking for 77 car spaces. There is potential for a redevelopment on site up to 15-storeys high.

PERTH - $6.5 million
A 1,697sqm development site in Perth’s CBD has been snapped up by West Australian property developer firm Finbar for $6.5 million.

Situated at 240 Adelaide Terrace the site offers a vacant 62-room hostel-style accommodation, a three-storey building at the rear, an external courtyard, landscaped backyard and 24 on-site car spaces. Finbar intend to pursue a mixed-use re-development, which will be their fourth CBD based project.

OAKLANDS PARK - $670 million
Lendlease has sold their half share in Adelaide's Westfield Marion for $670 million to a property trust sponsored by Singapore Press Holdings at a discount of more than 9% of its book value.

The sale has been eagerly watched by an awaiting market who believe it will set a benchmark for the valuation of major malls across Australia.

Lendlease's investment arm made the decision to sell its half stake in Adelaide's biggest mall in efforts to meet as much as $2 billion in redemption requests from its unlisted retail fund. The share was initially valued at $737.5 million, which was the book valuation for the remaining stake held by the shopping centre's co-owner, Scentre Group.

The deal was handled by Simon Rooney of CBRE and Lachlan MacGillivray of Colliers International.