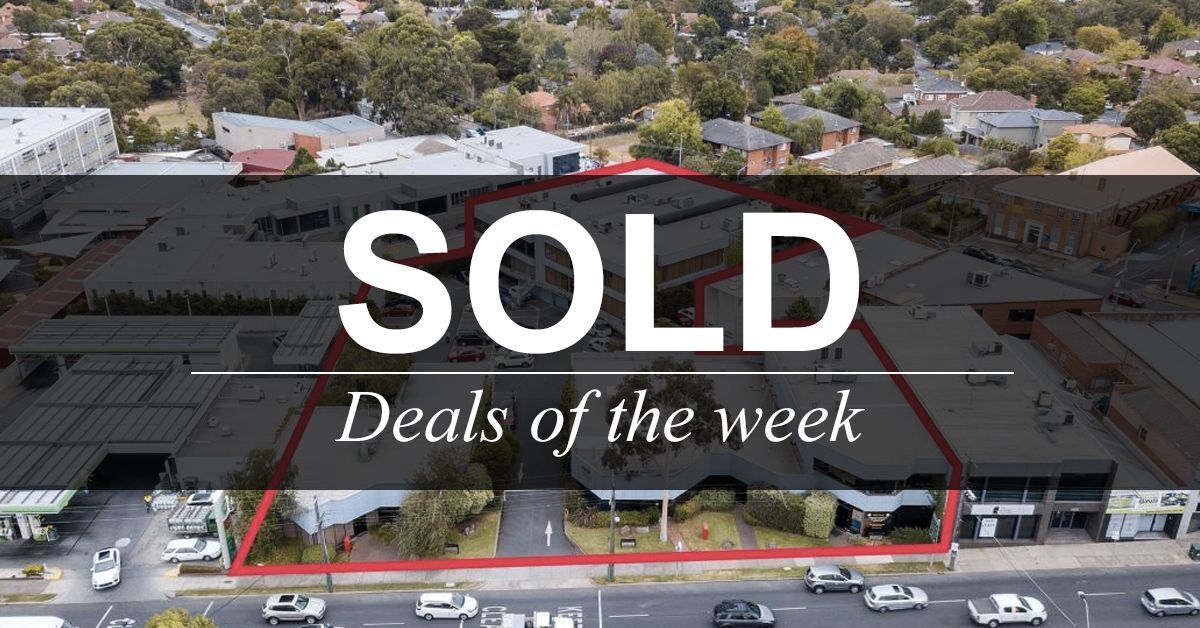 KEW EAST - $20 million +
The Kew Corporate Centre, located at 830 – 832 High Street and 1401 Burke Road in Kew East, has sold for over $20 million less than six weeks after it was initially listed. The campaign garnered 225 enquiries, 32 inspections and nine offers.

A local investor secured the property for a speculated price of more than $21 million.

DONCASTER EAST - $2.35 million
A retail space in Doncaster East, held by Pace Developments, has been sold to a local investor for $2.35 million.

The mixed-use development site, situated at 3-11 Mitchell Street, encompasses a 302sqm building which retains its lease to a Chinese restaurant named Wonderbowl.

CHATSWOOD - $438 million
The Zenith Centre in Sydney’s northern Chatswood precint has attracted the attention of US heavyweight Starwood Capital and Sydney-based Arrow Capital Partners, who recently purchased the office tower for a whopping $438 million.

The twin tower complex was last sold in 2016 to Centuria Capital and BlackRock for $279 million. This considerable sale follows a trend of recent big-hitters making high sale price waves for office towers in the suburbs.

The sale was handled by real estate agencies Knight Frank and CBRE.

FAIRFIELD - $85.3 million
Neeta City, a sub-regional shopping centre in Sydney’s western suburb Fairfield, has been picked up by the Fairfield Centre Syndicate for $85.3 million.

The 24,750sqm property was presents significant redevelopment opportunities and is anchored by a Woolworths supermarket and a Big W discount department store.

The new owners intend to expand their investment strategy, announcing plans to acquire not just defensive assets such as Neeta City, but also to pursue counter-cyclical properties like premium and A-grade office towers in Perth.

"Perth in particular is expected to outperform all major cities including Sydney and Melbourne in terms of commercial rental growth this year,” Atlas executive chairman Guy Hedley commented.

The sale follows a series of direct property offloading as Challenger looks to capitalise on rising prices. Last week the firm sold Brisbane’s NEXT Hotel and a CBD Retail development to Salter Brothers for $150m.

Sentinel has continued, over the past three years, to assemble a portfolio of properties in Brisbane, Darwin, Townsville, Cairns, Newcastle, which also includes the north coast NSW regional centre of Port Macquarie valued at more than $350m.

The 14 level office building spans 14,640sqm and was purchased fully leased via JLL.

MEADOWBROOK - $5.42 million
A 6,743sqm property, holding address at 1-15 Beal Street in Meadowbrook, has sold to a Brisbane-based manufacturing and engineering business has paid $5.42 million.

The southern Brisbane site will become a new headquarters for the buyer and currently comprises a 3,836sqm tilt-panel warehouse. The new owner has also announced intentions to install a crane as well as retrofit the site to suit their expansion plans.

NOOSA - $5.06 million
A retail investment property on Hastings Street in Noosa has sold to a local private family for just over $5 million.

With an NLA of 113sqm, Shop 1 at 55 Hastings Street is leased to Lorna Jane Pty until August 2022 with a five-year option and has a net rental income of $265,533 after land tax deductions.

PARK RIDGE - $4.17 million
A convenience retail centre at 3722 Mt Lindesay Highway, Park Ridge, around 32km south of Brisbane, has been acquired by a local investor for $4.17 million.

The sale was negotiated by Jon Tyson and Michael Harcourt of Savills Retail Investments.

PERTH - $8.65 million
The Globe Backpackers and City Oasis Resort Hostel, situated at 553-561 Wellington Street in Perth’s CBD has sold to a Perth developer for $8.65 million.

The site was sold with development approval for a $38 million student accommodation project. The approved plans include designs by architectural firm MJA Studio for a 39-storey student accommodation tower, which will preserve the existing late 1800s exteriors on Wellington and Queen streets.

The sale was handled by Colliers International’s Tim Scott and Ben Tan.