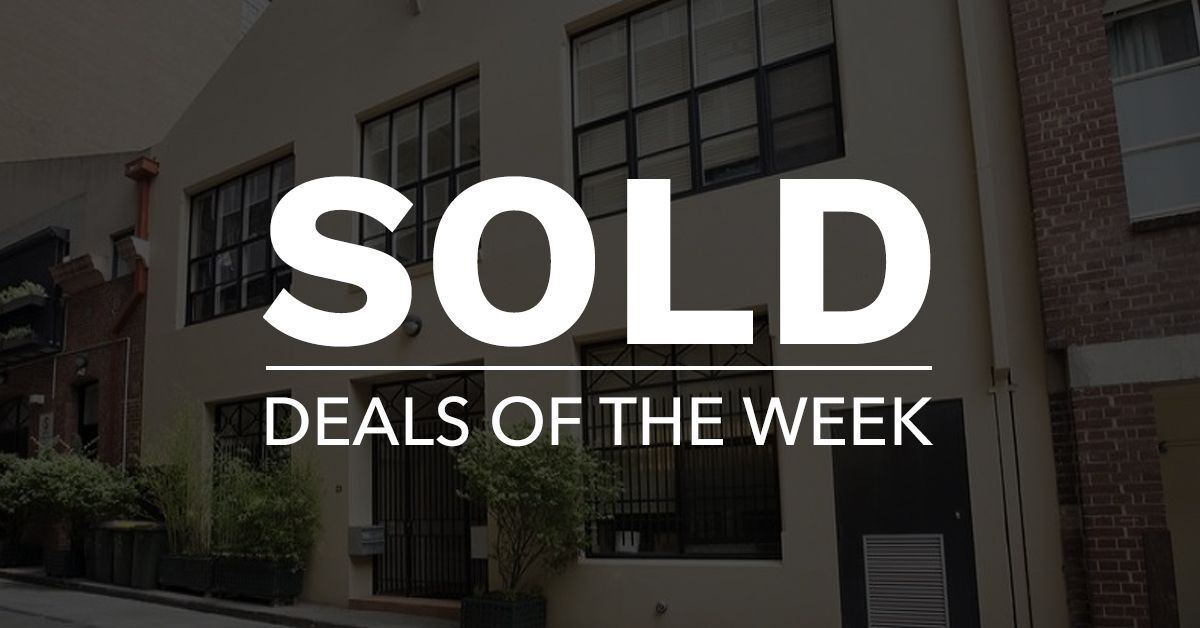 Located at 1816-1862 Dandenong Road the asset expands across 3.2 hectares and is occupied by 10 buildings including a recently constructed 6.1MW data centre.

The move is a strategic one, with Centuria heads John McBain and Jason Huljich backing the two areas which could benefit from the coronavirus crisis, as more people work from home or in suburban offices rather than in CBDs. The deal includes a 30-year leaseback arrangement, with Telstra taking place as Centuria’s largest tenant.

MELBOURNE - $6.9 million
Four apartments in Melbourne’s CBD have been jointly sold for close to $7 million after the individual owners banded together for the sale.

The double storey property, located at 23-25 Coromandel Place, was constructed in the 90s and will now make way for an office, with the new owners intending to own and occupy.

SEAFORD - $1.88 million
An industrial warehouse in the Melbourne suburb of Seaford has sold for $1.88 million following successful post-auction negotiations with a local investor.

The asset was marketed and sold by Ray White Commercial’s George Kelepouris.

Located at 180 William Street, the ‘No Birds’ site (as it is known), encompasses 5,000sqm site and was put on the market by Arnold Kluck under a three-year-plus settlement agreement.

The new owner has announced intentions to develop a luxury mixed-use project in excess of $500 million. Full plans are yet to be laid, however the concept is said to incorporate around 200 ultra-luxe apartments, high-end ground-floor food and retail outlets and possibly a small boutique hotel.

Mr Assouline noted that the northeast-facing site offers views of the nearby cathedral, the Harbour Bridge and Garden Island; “This is such a significant site. We will create a lot of jobs and bring so much activity and employment. This is one of the biggest sites in the city. The views are ridiculously good.”

BYRON BAY - Undisclosed
Byron Bay's newest luxury boutique hotel, The Bower, has been snapped up by a Gold Coast-based investor with interests in real estate and hospitality for a yet-to-be disclosed amount.

Featured in Conde Nast’s “Traveller Hot List 2018, the near-new hotel offers 28 guest rooms on a large 4,495sqm Bangalow Road landholding. The Bower is the latest in a series of Byron Bay hotel transactions, with more than $170 million in properties changing hands in the past 12 months, including the $42 million sale of the Byron at Byron.

CLAYFIELD - $36.5 million
The Healthcare Wholesale Property Fund (managed by Dexus) has swooped in to secure the College Junction commercial complex in Brisbane’s north Clayfield for $36.5 million.

Situated at 695 Sandgate Road, the asset comprises 3,118sqm of lettable office space within a new three-storey building completed just three years ago. It was sold close to 100% occupied, with a small 154sqm section still available for lease; the anchor tenant is Qscan Radiology Clinics. The vendors originally purchased the complex in 2014 for $3.05 million.

CABARITA - ~$5 million
A Queensland development company has beaten stiff competition to secure The Hideaway, Australia’s premier glamping resort, for ‘circa $5 million’ – the biggest sale the village has seen in over 10 years.

Located at 2-6 Tweed Coast Road in Cabarita, the 2.803 Ha asset will now change hands to a Brisbane-based civil contract company, who may face strong community opposition if considerable development plans are proposed. The site represents the only development land remaining on the eastern side of Tweed Coast Road and is R3-zoned for a unit or townhouse development or land subdivision. The news of the asset hitting the market raised concerns within the local community, with a campaign launched shortly thereafter to keep the land in local hands.

PERTH, MELBOURNE, SYDNEY & GOLD COAST - $14 million
Four industrial assets belonging to the founders of Nationwide Towing & Transport have been sold with a leaseback to separate buyers for a speculated total price of more than $14 million.

FYSHWICK - $15.3 million
An office in Fyshwick, seven kilometres south east of Parliament House and occupied primarily by the government, has recently traded hands to an offshore fund for $15.3 million.

Holding address at 5 Tennant Street, the 4,703sqm property offers 4,049sqm of NLA across two large levels, as well as an under-croft car park with 115 bays.