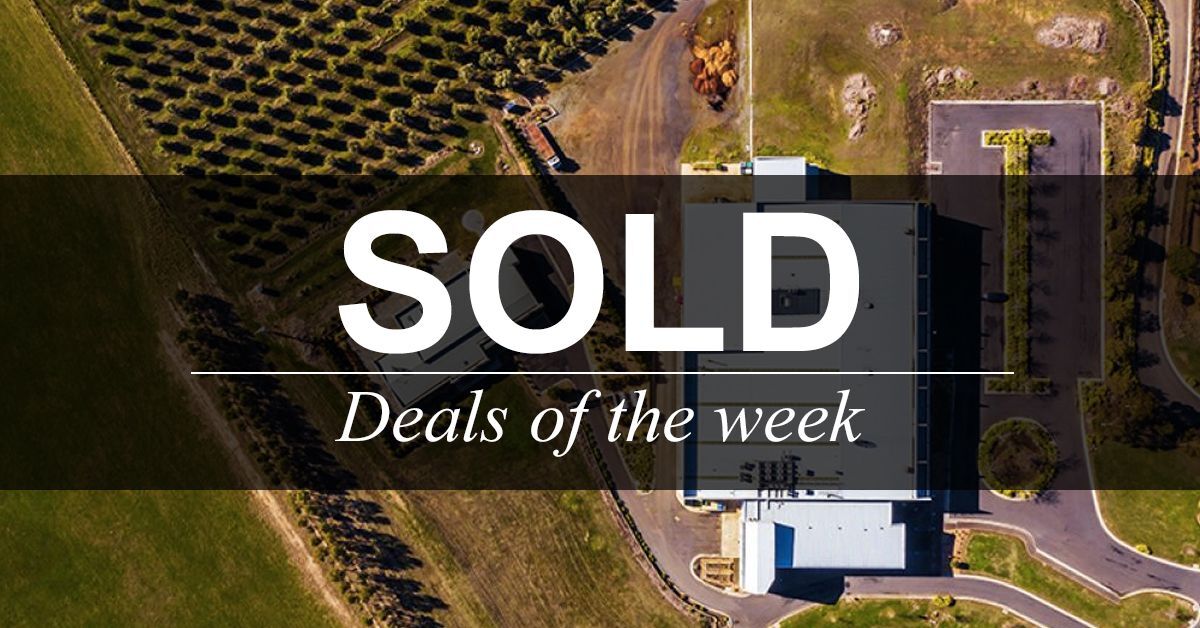 RICHMOND - $10 million
A 1,165sqm development site on Swan Street in Richmond, has been picked up by an owner-occupier for $10 million, marking the first time the property has sold since the 1970s.

The warehouse and showroom on site is leased to Austral Bricks and was marketed with development potential up to 10 floors.

HAWTHORN EAST - $4 million
A corner commercial property with development potential in Hawthorn East has traded to recognised developer Pace, for just over $4 million.

Holding address at 9 Montrose Street, the 475sqm commercial site is leased to a Crossfit gym and was sold with an approved permit for a nine-storey 34-unit apartment project.

Situated at 45 Mundy Road in Sunbury, approximately 45 minutes north-west of Melbourne’s CBD, this magnificent property extends over 63.4 hectares of land and includes a well-established olive and vineyard plantation with a processing facility catering for its 12,000 olive trees and 13,000 vines plus 24 hectares of undeveloped vacant Green Wedge Zoned land.

NORTH SYDNEY - $202 million
Local developer Billbergia has found a buyer for the hotel component of their 48-storey mixed-use tower in North Sydney. Singapore-based serviced apartment giant The Ascott Limited, in a joint venture with Middle East sovereign wealth fund, the Qatar Investment Authority, have agreed to a $202 million deal for the 252-room hotel.

The hotel, situated at 86-88 Walker Street, is expected to be completed in 2021 in what will then become North Sydney’s tallest tower.

The complex will include the Citadines Hotel with 252 apartments, a restaurant, rooftop bar, meeting rooms, business centre, executive lounge, gymnasium and end-of-trip amenities. Above the hotel will be 13,000sqm of office space across 21 levels.

PARRAMATTA - $80 million
Wentruth Pty Ltd, a private Asian investor and new entrant to the Australian market, has agreed to an exchange of $80 million for a six-storey office building in Parramatta's CBD.

Raffles Education bought the property at 1-3 Fitzwilliam Street in Parramatta for $29 million in 2014 and have been looking for a buyer since their only campus closed down earlier this year.

The 2,346sqm property, at 72 Melbourne Street, was offered for sale by the Clancy family in June as a freehold going concern. Speaking to The Sydney Morning Herald last month, Mr Laundy said that the new spate of hotel purchasers happening across the state were an effort for traditional operators to “back into pubs to create that local feel".

BANKSMEADOW - $6.15 million
Hotel magnate Jerry Schwartz has moved in a new direction after acquiring a freehold industrial site in Sydney's south, with intentions of developing a cool room and warehouse in its place.

The purchase of the 2,481sqm site at 81-83 Corish Circle in Banksmeadow was made off-market. Colliers International's Michael Crombie and Trent Gallagher handled the campaign stating that it was a record sale rate for industrial sites in the Botany area.

Situated at 16 Mineral Sizer Court, the 1.1-hectare property retains a five-year lease to furniture business Nick Scali who use the space as a distribution centre.

The site at 2-8 Lucas Street already has a stage-two development approval for 74 apartments, however BPG will look to redesign the scope to progress with a 68-apartment project.

NOOSAVILLE - $1.34 million
A mixed-use zoned, riverfront property in Noosaville has recently sold under the hammer for $1.34 million.

The Sunshine Coast property, designated at 23/185-187 Gympie Terrace, has a 74sqm ground floor shop (retaining its lease to a café) and a two-storey residential unit upstairs. The combined annual rent of the property is $80,000.

Situated at 77-83 Scarborough Beach Road, the combined land area of 1,798sqm was sold cleared and ready for development. The previous owners Yolk Property, a well-known local developer, obtained a development application for a mixed-use project before selling.

JLL's Australia head of capital markets, Tony Iuliano, noted that the sales, at 46-70 Grand Trunkway, Gillman, 103 Welshpool Road, Welshpool and 16 Dawson Street, East Arm, outside Darwin, showed that demand for industrial assets at a time of low stock was pushing investors beyond the core east-coast markets.