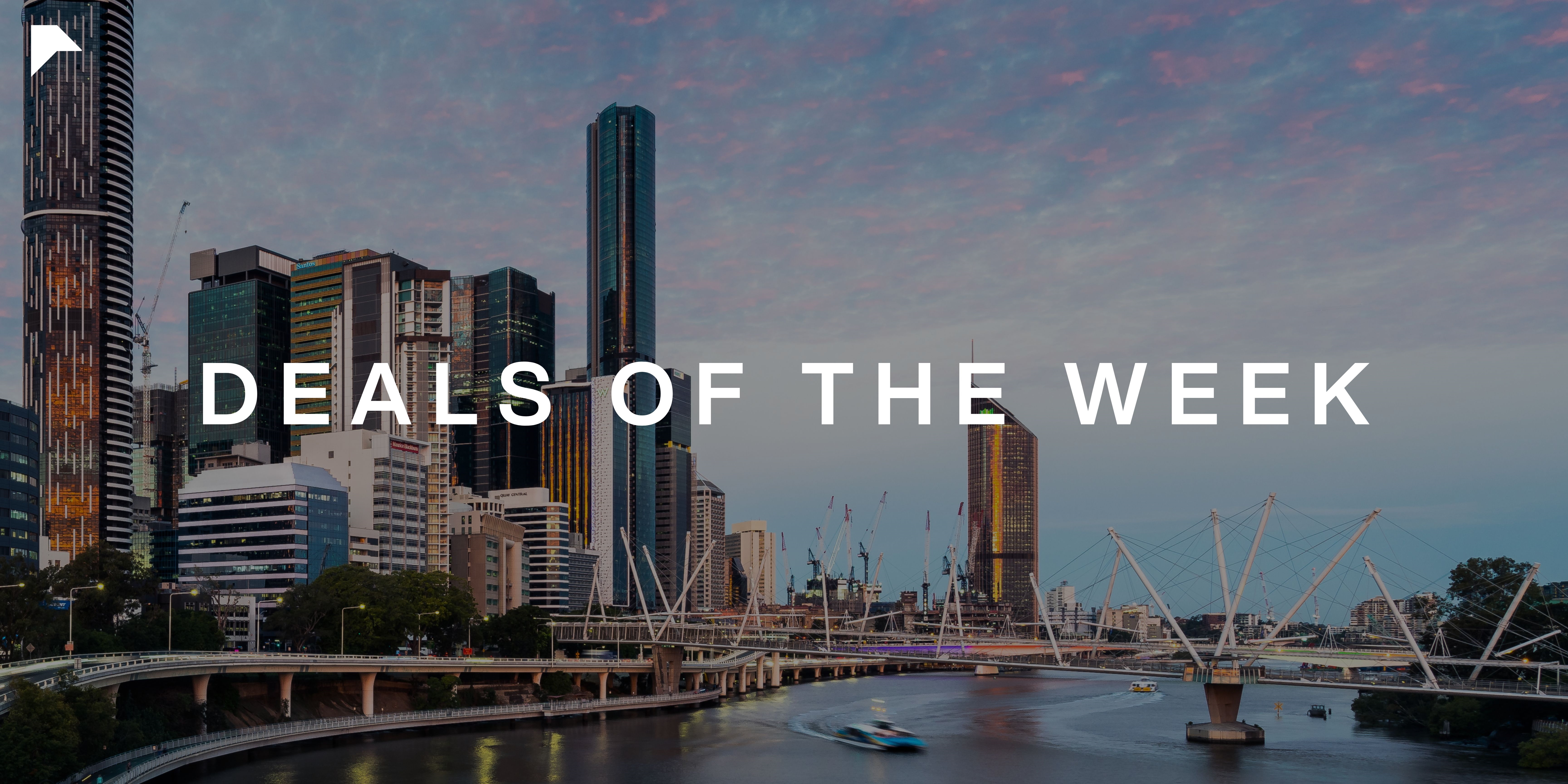 A 79,000 sqm landholding at Lot 1 & 12 Ascot Gardens Drive in the Ballarat fringe suburb of Bonshaw has sold to a Sydney-based residential developer, after an Expressions of Interest campaign that procured over 150 enquiries. The transaction was managed by Stonebridge Property Group’s Julian White and Chao Zhang, in conjunction with Buxton Ballarat’s Mark Nunn.

“Demand was incredibly strong for this property, with the sale being completed on an unconditional basis,” Mr. White explained. “The depth of bidding highlights the demand for greenfield land, and the growth and popularity of buyers seeking regional exposure to their portfolio.” With part of the 2026 Commonwealth Games set to take place within regional Victorian cities like Ballarat, Geelong, and Bendigo, investors are looking to capitalise on opportunities within these municipalities.

Fitzroys’ Brent Glassford and Marco Sandrin sold 26 Swanston Street in Preston at a competitive auction that was fought between four bidders. Ultimately, an adjoining owner looking at expansion was able to secure the facility. The 400 sqm office and warehouse was offered with vacant possession, and includes a 135 sqm mezzanine and four on-site parking spaces.

“The neighbouring owner was looking at expansion and this property presented the ideal opportunity to facilitate that, rather than going into an incredibly tight leasing market that is seeing historically low vacancies,” stated Mr. Glassford.

A prominent fully-leased freehold investment positioned within the Great Ocean Road’s most established retail and tourism precinct has sold via a successful Expressions of Interest campaign orchestrated by JLL’s Nick MacFie, Josh Rutman and MingXuan Li. The site, located at 106-112A Mountjoy Parade, is zoned Commercial 1 and General Residential, and is comprised of a mixed-use multi-level building on the 1,341 sqm site. The asset contains 6 apartments and 5 retail shops, with retail tenancies that include Tommy Bahama, Deluxe Lorne, and Lorne Beach Club.

A historic 16.5-acre parcel of land at 70 Eaton Road has been sold by the Eaton family, who decided to sell the property as the Western Sydney Aerotropolis looks to renew the area in time for the West Sydney International Airport opening in 2026. “We are continuing to see demand for the area grow as we get closer to the new airport opening in 2026 and investors are realising the earlier they get in, the more likely they are to benefit in the future,” Colliers’ Nick Estephen stated. Mr. Estephen transacted the property alongside colleague Thomas Mosca.

“The new AGB rezoning means highly sought-after land is now available for agribusiness hubs, providing an extraordinary opportunity to invest in super-prime landholdings with direct access to the International Airport, Experience Centre and The Western Sydney Aerotropolis,” according to Mr. Mosca.

The 10-level CBD office tower at 193 North Quay has been purchased by Australian-based funds management company Aviator Capital, after a sales campaign facilitated by CBRE’s Jack Morrison, Peter Chapple and Adelaide O’Brien, who brokered the transaction on behalf of the vendor, the Kyko Group. The asset is in a prominent corner position, and contains approximately 7,631 sqm of net lettable area that includes ground floor retail tenancies, as well as one level of secure basement parking.

“193 North Quay marks Aviator Capital’s fifth acquisition in Queensland and first in the Brisbane CBD,” stated Aviator Capital Managing Director, Andrew Glen. “The property holds a prime riverfront position in a sector of the Brisbane CBD that is set to benefit from enormous surrounding infrastructure development. We were attracted to the fundamentals of the building as an office asset, as well as the longer-term development proposition.”

Perth-based real estate funds management group, Acure Asset Management, has purchased the Emerald Lakes Town Centre, situated within the Emerald Lakes Estate. The strata-titled building sold on a passing yield of 7.53%, based on a total net income of $1,641,742 per annum at the time of sale. The five-level commercial and retail building is occupied by 15 tenants, including Cardno, Oliver Hume and The Uniting Church.

After generating in excess of 100 enquiries, 6 Ron Parkinson Crescent has sold to Trilogy Funds’ industrial trust, in a deal that stands as the biggest industrial transaction conducted on the Sunshine Coast in the year thus far. The Expressions of Interest campaign was managed by Colliers’ Nick Dowling, Nick Evans, David Brisk, and Daniel Coburn. The civil construction materials supply business Civilmart occupies the property, and carries a 10-year lease that expires in 2032. The property is comprised of approximately 2.612-hectares, and possesses a 4,900 sqm warehouse.

According to Mr. Dowling, “Industrial property is the most sought-after asset class in the region and the prices being achieved reflect the minimal number of investments of the scale currently available." The tight vacancy rates being observed in the Australian industrial sector are being credited with part of the demand for this property.

A childcare centre and swim school investment within the north Brisbane suburb of Rothwell has been offloaded by vendor Wenworth Property Group, in a deal facilitated by Ray White’s Stephen Kidd and Elliot Kidd. The prominent single-storey asset at 560 Anzac Avenue is currently leased to Lead Childcare. The sales price reflects a passing yield of 5 per cent. “Childcare centres remain one of the hottest asset classes we are dealing with in the current market,” Mr. Elliot Kidd commented.

1-7 Napoleon Street in Cottesloe has sold for $4.825 million, generating an investment yield of 4%, which serves as a record for the 40-shop, cosmopolitan retail strip the property is a part of. The 382 sqm landholding includes the renowned and well-established Vans café/bistro, and Esola Jewellery, which has occupied the premises since the 90s.

The team of Jack Bradshaw and Vincent Siciliano, from LJ Hooker Commercial Perth, sold the property on behalf of the vendors, Reid Nominees Pty Ltd, who have owned the prominent piece of real estate for decades. The site was sold to Jasara Nominees Pty Ltd.

The Singapore investment and asset management vehicle High Street Holdings (HSH) has acquired Perth’s Peppers King Square, in a deal negotiated by CBRE Hotels. Located at 621 Wellington Street, the 17-storey hotel was initially opened in 2016, before going up for sale in 2017. HSH’s latest purchase adds considerable value to their growing portfolio of major Australian properties, which was bolstered notably back in May, when they acquired Rydges North Sydney. The Peppers Hotel will be rebranded as Rydges King Square.

“We are extremely excited to have completed the acquisition of the Peppers Kings Square Perth,” stated HSH partner, Daniel Yip. “The freehold, 120-key hotel is a great value-add opportunity in one of the country’s hottest economies and presents multiple upside opportunities, including a repositioning, the reconfiguration of the hotel’s ground level and meeting spaces as well as the potential to create a multipurpose venue on the rooftop.”

Local investment firm Greenpool Capital has partnered with Savills Investment Management to purchase the Forest Lakes Shopping Centre in the south-east Perth suburb of Thornlie, in an off-market sale arranged by Simon Rooney and James Douglas of CBRE. The centre offers 42 specialty shops, kiosks and pad sites, which complement the anchoring retail outlets; a set of Coles, Woolworths and Aldi supermarkets. The 14,577 sqm centre sold on a passing yield of 5.9 per cent, and was divested by vendor DRH Property Investments.

“The centre is 97% occupied, has an MAT of $128.8 million with specialty productivity 14% above benchmark, and it trades at a remarkably low specialty occupancy cost,” commented Brad Osborne, the Managing Director of Greenpool Capital. “Greenpool is currently preparing an Information Memorandum for the investment opportunity and welcome interest from wholesale investors.”