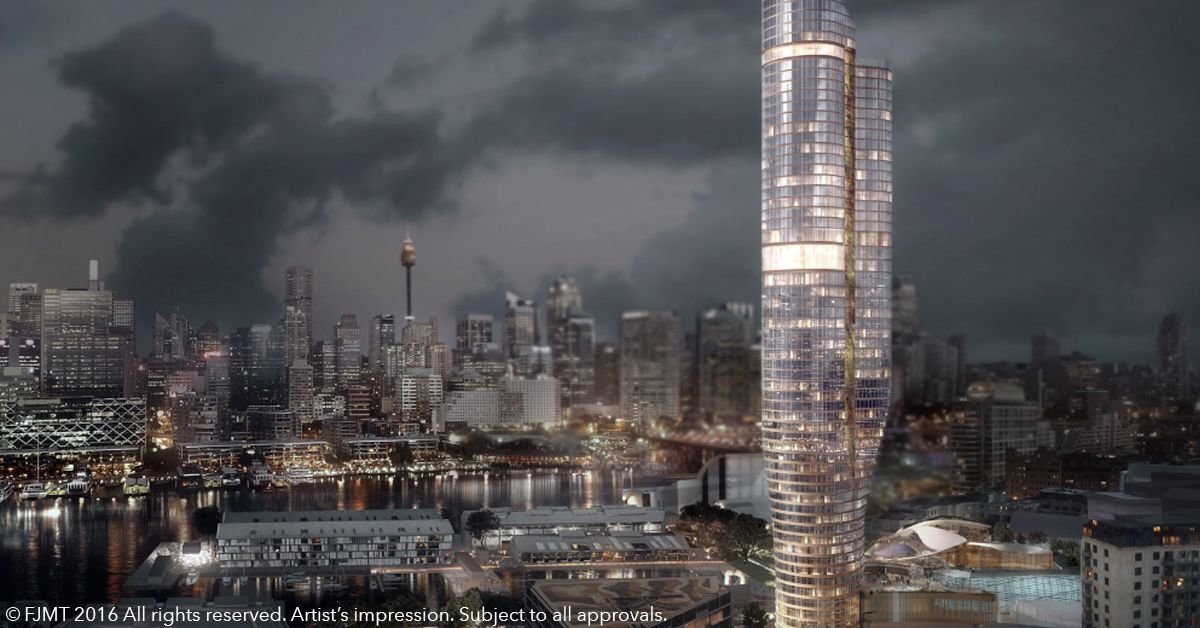 Continuing with instalment number two of our three-part series, we move into New South Wales for a look at alternative developments sitting on the edge of the horizon.

Here are five alternate developments that have recently been submitted for development approval.

The Ritz-Carlton at the Star
80 Pyrmont Street, Pyrmont
By no mere feat, the Marriott International’s Ritz-Carlton is hoping to make an excited return to The Star, after papers were lodged by Sydney’s Pyrmont casino.

The development application was recently lodged for the construction of a new 61-storey hotel tower (see image). The NSW Department of Planning will host an exhibition of the proposal to the public, before setting to the task of review.

Architecture firm FJMT was selected in December 2016 and with their plans, comes 220 luxury hotel rooms managed by Ritz-Carlton and 200 residences below. Featured amenities will include 15 restaurant and bar dining outlets, a rooftop terrace, Sky Lobby, three swimming pools, two fitness centre and a spa and wellness centre.

A five-level “Neighbourhood Centre” has also been designed, catering to events and conferences with the inclusion of a networking and hot-desking facility.

The Star is working with Hong Kong property developer Chow Tai Fook and Far East Consortium on this $500 million project.

Construction is expected to take two and half to three years after final approvals from the NSW Department of Planning.

475-501 Victoria Avenue, Chatswood
Cromwell Property Group currently operates an existing twin tower office complex in Chatswood at 475 Victoria Avenue. The 13 upper levels of each tower are available for commercial purposes and rest above a ground floor retail plaza and 398-bay basement carpark. The two buildings also encompass substantial underutilised spaces to major frontages and it is with this space that they intend to further develop.

A $75 million project has recently been submitted for approval and is hoped to result a new high-rise hotel and additional office space on the diagonally opposite corner.

The hotel will provide 156 hotel rooms across its 17-storeys. Project Architect Nettleton Tribe has included such amenities as a restaurant, gym, pool, bar and conference centre. A major refurbishment and landscaping of the site's ground floor will also be undertaken during the construction period. No hotel operator has yet been decided upon.

The additional office area has been included by way of a four-level stand-alone building primarily fronting Victoria Avenue.

29-33 Oxford Street, Epping
Plans for the nation’s tallest integrated aged-care facility have been lodged recently by developer Stockland. Epping, in Sydney’s north-west, will be home to this $181.5 million project where a new 29-storey building will be dedicated to residential aged care and independent seniors living.

The project is situated on the grounds of Our Lady Help of Christians Church and is working in conjunction with the Catholic Diocese of Broken Bay. As such, the aged-care development will also encompass offices, retail, a primary school, landscape grounds and an ancillary church that will befit the Catholic organisation.

Reaching 95.9 metres, the tower will house a 132-bed residential care facility and 205 independent seniors living units. The school will accommodate 210 students, while the church will seat 200. A basement carpark for 372 vehicles has also been drawn into the plans. Architectus are responsible for the project design.

FJMT have aimed to meet new standards for the design and construction of boarding houses. The building will retain the existing warehouse façade while internally residents will enjoy communal facilities such as lounges, a study/work hub, games zone, breakout spaces and a common laundry facility.

277 Bigge Street, Liverpool
A $106 million commercial development has recently been proposed to decorate the Liverpool skyline.

The project is set to include the refurbishment of the existing New Commercial Hotel, with the new building rising up behind. Mackycorp are the developers responsible for the plans and have contracted Fender Katsalidis Architects for the designs.

The 25-storey tower will rise 97m and encompass approximately 24,000sqm of office space and 11 outdoor terrace with a Georges River aspect.

At ground level the renovated pub will be joined by four retail stores. There is also a proposed ‘Spice-Alley’ which will serve as a walk through to a food stall forecourt known as ‘The Stables’.