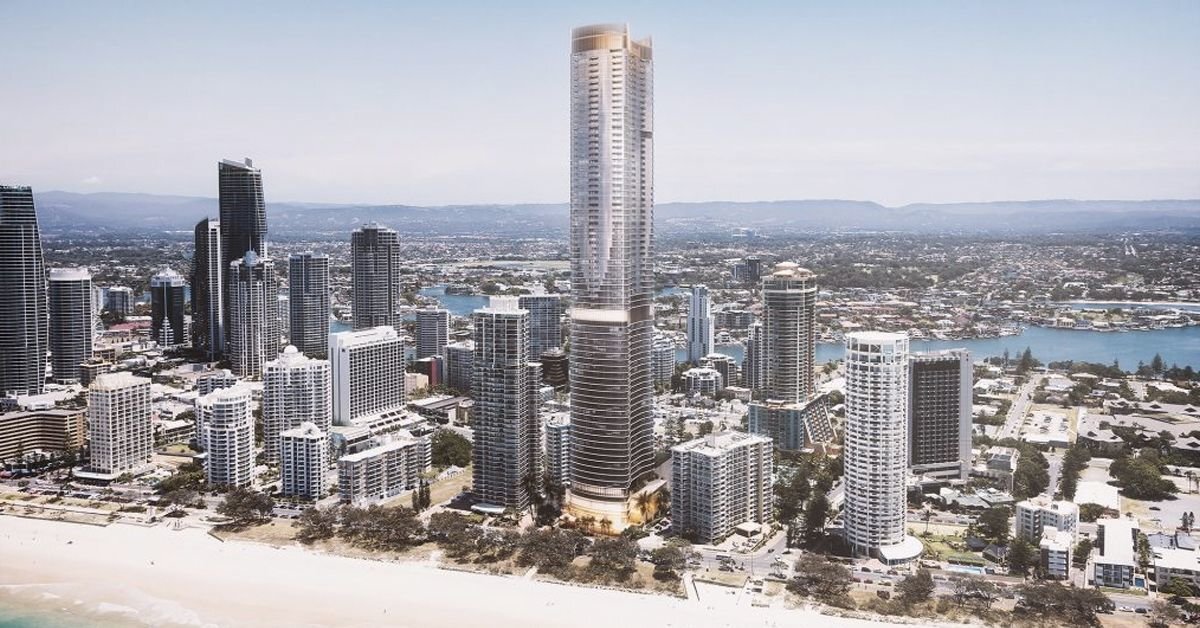 Now into the final instalment of our three-part series, we move up to Australia’s Sunshine State for a look at alternative developments soon to be available for their end-users.

The Gold Coast has long been a strong focus for hotels and high-rise apartments, with developers and investors tapping into continued confidence and strong government infrastructure investment. Brisbane has also benefitted from a surge of positive attention with NAB tipping the capital to enjoy above average growth over the next year.

With this in mind – we’ve dived into five alternate developments that are currently in the construction phase of their respective projects.

The tallest of the three towers has recently reached its maximum height, topping out at approximately 170m with 47-storeys; it is flanked by two more towers of 41 and 35 storeys.

Tower two will accommodate the planned luxury hotel with such features as a beach-facing resort pool, a health and wellness centre, separate indoor pool, gymnasium and beauty salons. The complex will also boast a grand ballroom able to welcome up to 800 guests.

An array of diverse one, two, three and four bedroom private residences will also be offered between the three towers.

The towers’ distinct glass-walled design came courtesy of a creative partnership between renowned Florida-based architect Chad Oppenheim and award-winning DBI Chairman and Director of Design Barry Lee. Inspiration for the concept was drawn from three smoky quartz crystals that were discovered in the region.

Yuhu Group are the developers responsible for the project with Multiplex securing the contract as builder.

Jewel is set to open in the middle of next year.

Mary Lane
111 Mary Street, Brisbane
Set just a stone’s throw from the Brisbane Botanic Gardens, Mary Lane is soon to be Brisbane’s newest luxury hotel and residence offering. This 37-storey, $325 million development, offers a 5-star Westin Hotel with 298 rooms from the ground to the 16th level. A four-level atrium boasting retail space, cafes, restaurants and bars is integrated into the hotel too.

From levels 17 to 36 the tower will offer a range of two and three bedroom private residences (a total of 184 apartments) with access to many of the hotel’s facilities. The 37th floor rooftop presents an exclusive hub for residents to use with outdoor entertaining, two barbecue areas and a glass function pavilion, as well as a landscaped terrace, fully equipped gym and infinity pool.

The tower was designed by Woods Bagot architects and is being built by Watpac. Construction is set to reach completion in late 2018.

FV – No.1
237 Barry Parade, Fortitude Valley
Tim Gurner, a BRW Young Rich Lister, is the developer behind FV, one of Brisbane’s most ambitious and face-changing new developments. With two of the three towers already complete, the focus is now on delivering the third and final building in September next year.

‘Flatiron’ and ‘Valley House’, the names of the two complete buildings, offer 651 apartments, over 2500sqm of retail and over 3000sqm of luxury resident amenity in the ‘FV Private Club’; this includes four pools, a cinema, private dining rooms, gym, yoga studio, casual dining and bar areas and a large area for outdoor entertaining.

Icon Co. have been selected as head contractor for No. 1, FV’s Elenberg Fraser-designed third tower. This project will present 267 serviced apartments with the high-level service of a six-star hotel. The ground Level will be occupied by a Lobby Bar and retail amenity. Level 5 will be occupied by a business club, private dining room, bar and lounge. No. 1’s rooftop space will present an exclusive curved skyline pool, two private spa areas with BBQ, bar, lounge and dining areas.

Ocean
‎84 The Esplanade, Surfers Paradise
Set to be the tallest and biggest tower in Surfers Paradise, Ocean is a mixed-use Meriton development drawing much attention nation-wide. This 75-level super-tower, will offer 722 apartments (200 more than fellow super tower Q1) and will include 319 serviced apartments to be managed under Harry Triguboff’s Meriton Suites brand.

Mr Triguboff said he intended Ocean to be a vibrant building – “almost a self-contained community”.

“It will have grand lobbies, a restaurant, cafes and neighbourhood shops and a selection of recreation options, with the beach and the endless views as mighty bonuses.”

The building was designed by Meriton in tandem with Sydney’s SJB group. The head contractor responsible for the build is Karimbla Construction, a Meriton subsidiary.

The Meriton Suites hotel component is set to open to the public in 2020.

Elizabeth Arcade
97 Elizabeth Street, Brisbane
This purpose-built student accommodation project will present two towers and yield 244 apartments, with a total of 901 student beds, in the middle of Brisbane’s CBD.

The ground floor retail arcade will provide a new destination food and beverage experience for the Brisbane CBD with up to 12 retail tenancies, maintaining a physical connection between Elizabeth and Charlotte Streets, while providing the potential for connection to neighbouring CBD laneways.

The project will be Student One’s third student residence in Brisbane and was designed by Arkhefield with Icon Co. listed as the leading contractor. The project is set for completion in early 2019.

*Image above is an artist's rendering of the Ocean tower on the Gold Coast courtesy of Meriton.